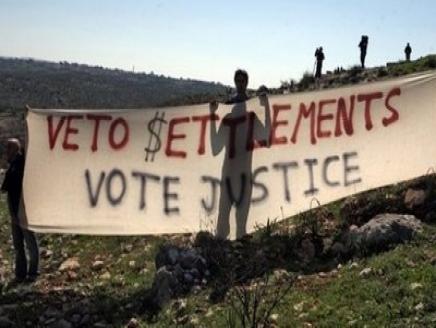 An estimated 3,000 Palestinians marched through downtown Ramallah, in the central West Bank, on Sunday afternoon to protest the U.S. government’s veto of a United Nations Security Council Resolution condemning Israeli settlements as an ‘obstacle to peace’.The protest was led by members of the Fatah party, which is the de facto Palestinian government of the West Bank, an area which remains under complete Israeli military occupation and martial law since 1967. They marched through the streets of Ramallah and rallied in al-Manara Square in the center of the city.

The protesters chanted slogans against US President Barack Obama, who himself declared the Israeli settlements to be an ‘obstacle to peace’ several months ago, but on Friday instructed his U.N. ambassador to veto a measure stating that same point. This is in spite of the fact that the other 14 member states of the Security Council supported the measure.

During Sunday’s march, demonstrators carried pre-printed posters showing the de facto Palestinian President Mahmoud Abbas, who remains in office despite his mandate having run out in January 2010. They also waved Palestinian flags, and voiced their opposition to the US veto of the U.N. resolution.

One organizer of Sunday’s protest, Mahmoud al-Alul, with the Fateh party, said that the veto was a move that shows U.S. opposition to the Palestinian people and their freedom, and U.S. support for Israeli injustice, oppression and occupation.

Palestinian political leaders also condemned the U.S. veto, which they say is a violation of stated U.S. policy and an obstacle to the peace process. The Palestinian Prime Minister, Salam Fayyad, who was appointed (unelected) by the Fatah party, told reporters, ‘The Americans have chosen to be alone in disrupting the internationally backed Palestinian efforts.’

In reference to the U.S. attempt to force the Palestinians to withdraw the resolution by threatening to cut off aid to the Palestinian Authority, Fayyad said, ‘We are not willing to compromise our national enterprise for a fistful of dollars, however big or small.’

The Palestinian Authority of the Fatah party is supported by around $200 million per year in U.S. aid. The U.S. supplies the Israeli government with $6 billion in direct and indirect aid per year, making Israel the largest recipient of U.S. aid money.