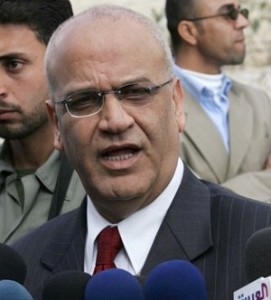 Following his resignation as Chief Negotiator for the Palestinian Liberation Organization, Saeb Erekat has, on Sunday, called for a re-examination of the Palestinian Authority.Erekat, speaking to the military run Israel Radio, stated that the PA had become inefficient, and should re-examine all issues regarding the peace process with Israel, including the possibility of land transfer.

Erekat’s statement comes a little over one week after his resignation as Chief Negotiator for the PLO. Erekat resigned on February 12, 2011, following the release of the Palestine Papers by Doha’s al-Jazeera Network and the British daily, the Guardian.

Erekat initially claimed that the papers were a fabrication, but later acquiesced and tendered his resignation, as the source of the leak was attributed to his office. Although Erekat changed his stance, and admitted the legitimacy of the leaked documents, he maintains that the context of the releases was distorted.