A Graveyard for Trees 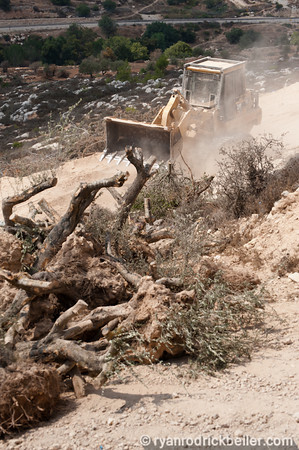 An apology for writing more frequent than the usual 2-3 messages a week but our hearts broke when we arrived to find that much of the Israeli uprooting of Palestinian olive trees was already done in Al-Walaja today. The old farmer Mohammed Al-Atrash (Abu Wajih) was standing there in shock, speechless, wondering where humanity is on this black day. Israeli authorities picked the day well: it was the day of returning to school and to work from the 5 day Eid (Holiday) at the end of the Holy Month of Ramadan. They brought massive forces starting at dawn and circled an area of over one square mile declaring it a closed military area. No media presence was allowed (so much for “democracy”) so that we could not even videotape the destruction as it happened, only its aftermath. Dozens of olive, almond, za’rur, and pine trees were destroyed. For pictures of the corpses, see footnote 1 below. This despite the fact that there is a court case pending on this land to be heard at the end of this month. The villagers called for presence in the village tomorrow (Tuesday morning).

I cried for this old gentlemen, who already suffered one heart attack and who reminded me of my late father. I also cried for the apathy of so many people and for the cruelty of Israeli contractors, their (Arab) workers, the Israeli private “security” guarding the bulldozers, the Israeli “soldiers” and “border police” who reminded me of mafias and of other fascists and racists. (2)

It was uplifting to hear that Turkey is removing the ambassador and deputy of the apartheid regime. Turkey has also started treating Israeli citizens coming to Turkey like (but not as bad) as Turkish citizens traveling to Lydda (aka Ben Gurion) airport. Some countries know what is right and what is wrong and act on this knowledge. It is a shame that Israeli ambassadors are still in Amman and in European cities. It is a shame that some Palestinians who refuse to reconstitute the PLO insist that they will continue “security cooperation” with the apartheid regime. Some even continue to meet with Israeli war criminals. Meanwhile the US administration in Israeli-occupied Washington DC is mobilizing its diplomats to try to stall and convince Mr. Abbas to go back to “negotiations”; the same useless negotiations between a prisoner and prison guards where the guards can determine everything (3). 20 years of this “peace process” should by now have demonstrated that it is nothing but a farce. Returning to it means giving more time for colonialism to finish their ethnic cleansing and finish the walls around the remaining “people warehouses”/ghettos/Bantustans. Al-Walaja is one such place as it will be surrounded on all sides by walls (an open air-prison). Meanwhile 1.5 million people remain in the largest concentration camp in history, otherwise known as Gaza strip subjected to an immoral and illegal blockade still with the help of Egyptian army (worried about losing US aid). Occasionally, Israel uses high tech ‘games’ to murder the sitting ducks (oops, humans) in Gaza (4).

(1)Please see these preliminary photos of the destruction in Al-Walaja today
http://www.ryanrodrickbeiler.com/Previews/Al-Walaja-5-S…kPcB5

(2) Here is my August 13 interview with Abu Wajih.
http://www.youtube.com/watch?v=wfuDLnqscXQ

(3) ‘Abbas: I met recently with Barak to discuss Israel-Palestinian ties’
http://www.haaretz.com/news/diplomacy-defense/abbas-i-m…82689
Background on the released Palestine Papers about Israeli sessions (again negotiations would not convey the real picture)
http://www.youtube.com/watch?v=cf8md1-2fpA

(5) The French branch of the terrorist organization Jewish Defense League is recruiting openly for people with military experience to come help racist colonial settlers in September in Palestine.
http://www.liguedefensejuive.com/voyage-de-solidarite-m…arie/

Bantustans and the unilateral declaration of statehood
http://electronicintifada.net/content/bantustans-and-un…/8543