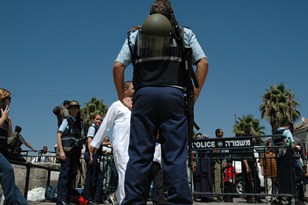 The Israeli Internal Security Services (Shin Bet) and the Police, claimed that they managed to foil a bombing that was allegedly planned to take place two weeks ago at a public transportation station in Pisgat Zeev, north of occupied Jerusalem.Israel claims that Hamas members intended to carry out several suicide bombings at the station, and that the Police arrested Ishaq Arafa, 23 years old, from Ras al-Amoud in Jerusalem, claiming that Arafa was tasked with handing an explosive built to Sa’id al-Qawasmi, from Hebron, in the southern part of the West Bank.

In its statement, the Police said that “Arafa was also behind the explosive charge that was placed near a government building in Jerusalem, six months ago. The explosion led to the death of a tourist, while several others were wounded.

The statement also revealed that five persons, believed to be members of the same cell with Arafa, planned to abduct an Israeli soldier, or a settler, in Gush Etzion settlement, near the Hebron.

According to Israeli reports, the Police, security services and the army in Jerusalem, managed to uncover 13 Hamas cells that operated in the West Bank and in Jerusalem. The cells mount to dozens of Hamas members.

Israel claimed that members of these cells received their orders and their money from an official in Syria through a person who lives in Jordan. The official in question was arrested at the Allenby Bridge, between Jordan and Palestine.

Israeli security sources further claimed that Hamas is trying to launder its money in China, and that members of Hamas, living in Saudi Arabia, Syria and Turkey are trying to funnel money to the Hamas movement in the West Bank, especially amidst ongoing arrests carried out by the Palestinian security forces against Hamas members, supporters, and Hamas-run institutions.

The sources added that Hamas detainees at the Negev Israeli detention camp are trying to encourage detainees, who are about to be released, to be involved in attacks against Israel.