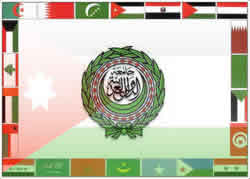 Permanent Arab envoys at the Arab League concluded their preliminary meeting, on Sunday evening in Cairo, to set the agenda for the 136 Arab League meeting attended by Arab Foreign Ministers, and decided to place the Palestinian issue on the top of its agenda.Palestine envoy at the Arab league, Barakat al-Farra, told reporters that the agenda of the ministerial council contains 22 sections topped by the Palestinian cause.

Al-Farra added that the Arab League regards the Palestinian decision to head to the United Nations as a very important move towards the independence of Palestine, and that should the United States use its veto power to foil the move, Arab countries will head to the General Assembly.

The Palestinian official further stated that the Arab Peace Initiative of 2002, that offered Israel a comprehensive peace agreement and normalization with the Arab World in exchange for its full withdrawal from all territories occupied in 1967, including occupied East Jerusalem, will be discussed in details during the Monday evening meeting that will be attended by Palestinian President Mahmoud Abbas.

Catherine Ashton, high representative of the European Union for foreign affairs and security policy, will also be attending the meeting, and will be asked to deliver a message to the EU to support the Palestinian and Arab move at the United Nations.

Furthermore, al-Farra stated that Arab countries agree on the urgency of financially supporting the Palestinian Authority in order to be able to perform its duties, and also discussed the Israeli violations in occupied Jerusalem in addition to Israel’s illegal use of water resources.

The Palestinian official said that the council discussed the Israeli nuclear file and Israel’s weapons of mass destruction, in addition to other issues regarding Sudan, Somalia, Djibouti and Eritrea.

The Arab Peace Initiative Committee will be holding a ministerial meeting on Monday evening, headed by Qatar; President Abbas, Catherine Ashton, and the Arab League Secretary General, Nabil al-Arab, will be attending the meeting.