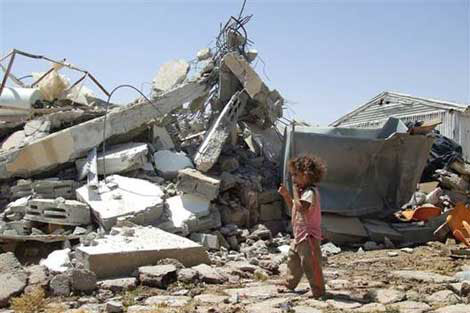 The Israeli government is planning to approve a new project that aims at building 10 new Jewish-only settlements in the Negev, by displacing thousands of Bedouins from the area.The project was described as the largest in recent years, and was formulated by the office of Israeli Prime Minister, Benjamin Netanyahu, and the Ministry of Housing.

The plan also calls for establishing suburban settlements in Arad area in the Negev, the Arabs48 news website reported.

Green parties and environmental groups in Israel protested the plan, and said that existing settlements in the Negev should be expanded instead of conducting new constructions.

The plan is said to include a project that aims at moving military bases from the center of the country to the Negev, and constructing houses for regular soldiers and their families.

The Arabs48 added that the project will be submitted for approval in the coming few weeks, and that the 10 new settlements would include nearly 1500 units, including units in Heran and Yateer settlements that were previously approved as part of the new “structural and development” plan in the Negev.

Last week, the Israeli government approved a plan to evacuate 30.000 Bedouins living in “unrecognized villages” in the Negev by relocating most them to other existing villages such as Rahat, Kaseefa and Houra.

Israel is also planning to evacuate the Arab village of Um Al Heran in the Negev, in order to construct the Heran Jewish settlements in its place.

There are 40 “unrecognized villages” in the Negev, inhibited by more than 75.000 persons, the Arabs48 said.

With the adoption of the Israeli ‘Planning and Construction Law’ in 1965, Israel refused to recognize the existence 45 Arab-Bedouin villages in the Negev.

The majority of the villages existed at the time of the creation of Israel in 1948 and some were established in the early 1960’s when Israel evacuated Bedouins from northern Negev to the south of Beersheba.

On Sunday, September 11, Israeli cabinet ministers approved a plan based on the “Prawer Report”, involving the forced removal of 30.000 Arab Bedouin villages in the Negev.

In the seventies, Israel forcibly evacuated dozens of thousands of Bedouins from their homes and lands in 40 villages, and moved them into seven towns that were established in the Negev.

The Bedouin people have lived in the south of the country for hundreds, if not thousands of years, but when Israel was created in Palestine, in 1948, the Israeli government chose not to recognize the Bedouin as residents, and have repeatedly destroyed their homes in the decades since.

When the ‘Prawer Report’, commissioned by the Israeli government to come up with a ‘solution’ to end the ‘Bedouin problem’, was released in June; the Association for Civil Rights in Israel filed numerous objections to the report.

The report states that the ‘unrecognized’ Bedouin villages must meet a number of criteria in order to be ‘recognized’, this includes economic sustainability and contiguity – criteria which many Bedouin people say involve the forced urbanization of their rural culture.

The Association for Civil Rights in Israel said that ‘If the same criteria were applied to the Jewish population, whole settlements – including community settlements, observatories, kibbutzim and moshavim – will be doomed”.