Palestinian Authority Will Not Push For Immediate Security Council Vote 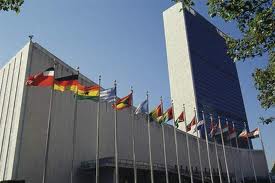 Although the Palestinian Authority of Mahmoud Abbas in the West Bank said it is determined to go ahead with its full UN Membership Bid, it has decided not to push for an immediate Security Council vote on the issue. Palestinian Presidency spokesperson, Nabil Abu Rodeina, stated that the Palestinian side will be willing to return to the negotiating table after Israel stops all of its settlement activities, violations, and after it agrees that talks should be based on the full withdrawal to the 1967 border.

The statements of Abu Rodeina came in response to the speech of U.S. President Barack Obama, during the opening ceremony of the 66th session the General of Assembly, and after a private meeting between Abbas and Obama on Wednesday.

The slowing down of the Security Council bid is said to give world leaders more of a chance to try to find a suitable alternative that would ensure the resumption of direct peace talks between Israel and the Palestinians.

Talking to reporters on Wednesday, Palestinian negotiator, Dr. Nabil Shaath, said that the Palestinian leadership wants to grant the Security Council extra time to process the full membership application before heading to the General Assembly.

Shaath added that, once the bid is submitted, the Security Council can either act fast or just put the issue on hold.

“If we fail, we will keep trying”, Shaath stated, “There is no time limit on the process”.

Meanwhile, the United States and Israel are still going ahead with their pressure campaign to convince Security Council member states to vote against, or at least abstain from voting for the Palestinian statehood bid.

During his speech, Obama stated that “peace has no shortcuts”, referring to the UN-statehood bid, and added that the only way to resolve the conflict is through direct peace talks.

The United States told the Palestinian leadership it is committed to the establishment of a Palestinian State, but added that the Obama administration strongly believes that “its own stances, not the UN stances, are the correct path to achieve peace”.

Obama met Palestinian President, Mahmoud Abbas, on Wednesday, on the sidelines of the meetings of the General Assembly.

He urged Abbas not to hand the full membership application to UN Secretary-General, Ban Ki-moon.

Israeli Ynet reported that Israel’s General Assembly team was satisfied with the speech by Obama, and added that the Israeli team stated that “the Palestinians are about to fold”.

The Israeli paper added that sources in Israel’s delegation said that both the U.S and Europe are “starting to realize the harsh realities in the Middle East”, adding that Israel presented a lot of intelligence information regarding what was described as “the penetration of Al Qaeda in Egypt”, and “the significant growth of radical Islam in Cairo”. The delegation also claimed that Sinai is becoming a second Afghanistan.

Both the US Administration and the Israeli government said that the Palestinian president must understand the economic consequences of the UN-bid that was dubbed as “unilateral”.

The US President also demanded Abbas to meet with Prime Minister Benjamin Netanyahu as soon as possible, and to re-launch a direct peace talks.

On Wednesday evening, French Foreign Minister, Alain Juppe, stated that a vote on Palestinian statehood will likely be conducted several weeks from now, an issue that would grant world leaders to find a solution to the current political crisis.

Meanwhile, the Israeli paper Ynet stated that these statements are considered to be the first retreat by Palestinian President, Mahmoud Abbas, who said that the Palestinians will be heading to the UN, in full speed, to seek recognition.

The paper added that the recent Palestinian statement regarding the vote delay came a few hours after U.S. President Barack Obama, delivered his General Assembly speech that was considered the most vocal American support to Israel since Obama took office.

Obama said that “a Palestinian state can only be established through direct negotiations, and not through shortcuts”, and added that “Israel is surrounded by enemies who waged repeated wars against it, and is facing rockets and incitement”.

He further stated Israel’s citizens have been killed by rockets fired at their houses and suicide bombings on their buses”.

He did not refer to the direct Israeli bombardment targeting Gaza, by air, land and sea, leading to thousands of casualties, mostly civilians including children and infants, or to Israel’s ongoing invasions into several West Bank communities, in addition to the illegal Israeli settlement activities, and the escalating attacks carried out by the settlers.

Israel’s UN ambassador, Ron Prosor, told Yedioth Aharonoth, stated that “the Palestinians change their minds fast” and that the Palestinian initiative will not succeed, but would cause further delays in the peace process.

“We could not totally stop the Palestinians from heading to the U.N”, he said, “We are in the middle of this process, going in the right direction, but as in all cases, we in Israel move from disappointments to sweeping victory”.