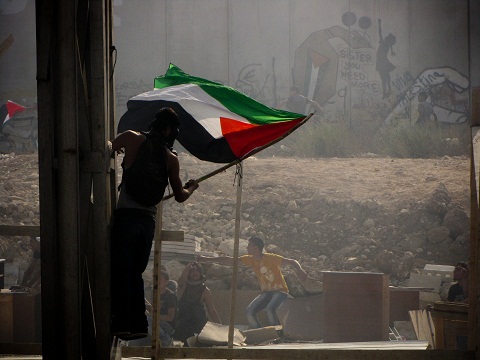 Palestinian medical sources reported that twenty Palestinians were wounded during clashes with Israeli soldiers stationed at the Qalandia terminal, north of Jerusalem.Israeli soldiers used an acoustic, vehicle-mounted device called The Scream to disperse protestors as well as a new type of tear gas, which eyewitnesses told Palestinian official news wire Wafa was more toxic than usual. Six protestors were injured by Israeli gunfire and an additional 14 were hospitalized for tear gas inhalation.

Shortly before noon, Israeli soldiers shot an unnamed 15-year-old in the eye with a rubber-coated steel bullet from a distance of 25 meters. He was taken to a Ramallah hospital, where it was confirmed he lost his eye.

The boy, as well as many others at the demonstration, was throwing rocks and bottles at the soldiers, who in violation of their own open-fire regulations shot from close range.

Four other Palestinians were shot and an international solidarity activist was shot in his ear. Three Palestinians–one from Jenin, one from Nablus, and one from Ramallah–were arrested by plainclothes Israeli troops.