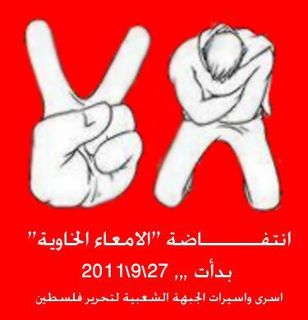 The Palestinian Center for Human Rights (PCHR) strongly condemns collective punishment measures being taken by the Israeli prison authorities against Palestinian prisoners in Israeli jails who have organized a hunger strike in protest to their deteriorating detention conditions.PCHR is also concerned over the health conditions of the prisoners who have now been in an open hunger strike for nine consecutive days, as the Israeli prison authorities have refrained from providing medical care to them.

PCHR calls upon the international community to exert pressure on Israel and compel it to respect international law, including ending the systematic cruel, inhuman and degrading treatment of Palestinian prisoners in Israeli prisons and detention centers.

Palestinian and other Arab prisoners initiated a hunger strike, which has progressively extended to all Israeli prisons and detention facilities. First, prisoners from the Popular Front for the Liberation of Palestine (PFLP) in Rimon and Nafha prison in Israel declared a hunger strike on 27 September 2011, demanding an end to the solitary confinement of 20 prisoners, some of whom have served more than 10 years in solitary confinement.

They also demand an end to the three-year incommunicado detention of PFLP Secretary General, Ahmed Saâ€™adat. Later, prisoners in other prisons and detention facilities joined and organized a three day hunger strike.

This move was expanded when prisoners declared an open hunger strike until their demands were met.

However, the Israeli prison authorities have refused to meet these demands and have escalated collective punishment measures against prisoners. It has placed dozens of prisoners in solitary confinement and transferred leaders of political prisoners to sections of criminal prisoners, in an attempt to break the strike.
Moreover, it has omitted to provide medical care to prisoners, including old ones, have refrained from having medicines and foods.

According to prisoners, the Israeli prison authorities have initiated a series of sanctions against prisoners, including withholding salt, which prisoners take to maintain the salt balance in their bodies, and electronic devices such as televisions after they had already censored some Arab news channels. Additionally, Israeli troops waged a campaign of raids and searches in detention cells, and used tear gas against prisoners. A number of prisoners were injured.

Since then, the Israeli prison authority has taken a series of measures against prisoners, including intensifying naked physical check of prisoners, and placing their leaders in incommunicado detention. In response, the prisoners have declared a series of protests against these measures and have organized a number of hunger strikes.

At least 6,000 Palestinians are currently detained in 22 Israeli prisons and detention facilities, most of which are inside Israel, in violation of the Fourth Geneva Convention, particularly Article 76, which stipulates that â€œProtected persons accused of offences shall be detained in the occupied country, and if convicted they shall serve their sentences therein.â€

These prisoners include 700 persons from the Gaza Strip (including 6 who have been detained according to the Illegitimate Combatant Code); 400 persons from Jerusalem and Arab areas within Israel; 251 children; and 37 women.

Additionally, the group includes 214 prisoners who have been placed under administrative detention, and 20 members of the Palestinian Legislative Council, most of them from the Change and Reform Bloc affiliated to Hamas.

PCHR strongly condemns these collective penalties and measures of intimidation, which are prohibited under international law, particularly Article 33 of the Fourth Geneva Convention, and:

1- Calls upon the UN Special Rapporteur on Torture and Other Cruel, Inhuman and Degrading Treatment or Punishment to present reports on the situation to the Human Rights Council to exert pressure on Israel to stop its practices against Palestinian prisoners.

2- Calls upon the UN High Commissioner for Human Rights to intervene to stop collective penalties executed by the Israeli occupation authorities against Palestinian prisoners.