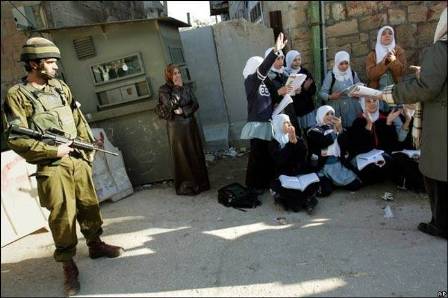 The teachers of Qurtuba School are still protesting in front of the military checkpoint at the entrance to Martyrs Street, in the middle of the West Bank city of Hebron, the Palestine News & Info Agency (WAFA) reported on Monday.
The faculty is protesting against the Israeli military’s decision that no citizen is allowed to enter the area without undergoing degrading physical searches at the electronic gate, which includes metal detectors and X-ray machines, at ad-Daboya portal.

The principal of the School, Ibtisam al-Junaidi, stated that the Israeli Army prevents the teachers and students from entering the school through the main route, due to the abovementioned decision.

She added that five teachers have started holding lessons on the path in front of the checkpoint.

WAFA also reported that a number of international activists and students’ parents are protesting in solidarity with the teachers. However, the army forced them to flee the scene, demanding that they bring an official paper that permits them to protest, which can be obtained from the Israeli Military Liaison Office.