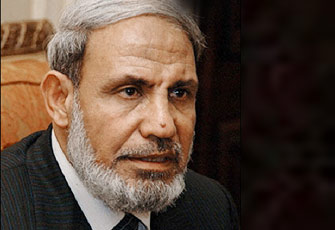 Hamas political leader, Mahmoud Zahhar, told Israeli daily Haaretz, that the prisoner-swap deal reached indirectly between Hamas and Israel includes lifting the Israeli siege on the Gaza Strip.Zahhar added that this issue was agreed upon when the German mediator started his role in the prisoner-exchange talks. “This is still valid under the current agreement,” he said.

The Hamas leader further stated that the deal to release prisoner-of-war Gilad Shalit, in return for releasing more than a thousand Palestinian detainees, also includes a section obliging Israel to improve the living conditions of the Palestinian detainees, adding that Gaza Strip families of the detainees will be allowed to visit their beloved ones.

After Shalit was captured on June 26th, 2006, Israel canceled all visitation rights to the families of political prisoners who resided within the Gaza Strip.

Zahhar also insisted that Israel will have to ease the restrictions on border terminals leading to Gaza, including travel from Gaza to the West Bank via Israel.

Moreover, he stated that the deal incorporated the increasing of exports from the Gaza Strip to Israel and abroad.

Meanwhile, officials at the Israeli Defense Ministry stated that the Shalit deal represents a shift in the relations between Hamas and Israel, adding that in recent months Israel started easing the siege on Gaza as part of an unofficial ceasefire between Hamas and Tel Aviv.