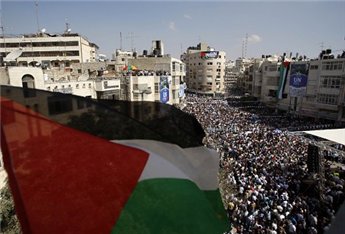 In the wake of a meeting held between the leaders of the Hamas and Fatah movements in Gaza on Sunday evening, they reconfirmed the implementation of the articles of the Palestinian national unity signed by the Hamas Political chief, Khaled Meshaal, and the Palestinian President, Mahmoud Abbas, the Ma’an News Agency reported Sunday evening.Dyab al-Louh, Fatah national relations’ commissioner, stated that the meeting was very significant and successful. Both leaders thrashed out the national unity and the meeting held between Abbas and Meshaal in Cairo on November 24.

“We’ve agreed to keep on discussing and coordinating in order to set up the suitable mechanisms for implementing the Cairo deal, struck by Hamas and Fatah,” said al-Louh to the Ma’an News correspondent, adding that “The groups reconfirmed the implementation of the signed national deal.”

This meeting is the first since the Palestinian President, Mahmoud Abbas, and the Hamas Political Bureau Chief, Khaled Meshaal, have held a meeting since November 24 in a bid to thrash out a deal to unite the rival groups and pave the way for elections.