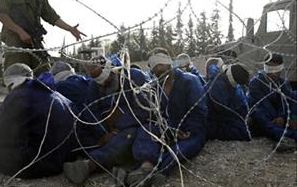 The Military Court at the Ofer Prison admitted Sunday that Israeli interrogators are using brutal methods to interrogate Palestinian detainees, the Palestinian Prisoners Society (PPS) reported.PPS stated that the court had to drop all charges against detainee Ayman Hameedah, aged 23, who was detained by the Israeli Army on numerous charges.

The court ruled that it has to drop the charges due to the illegal methods used by the interrogators who tortured and abused his rights for two months at the Asqalan Prison.

The Israeli Prosecution brought seventeen charges against Hameedah, including what was described as “conducting undercover military attacks”, possession of arms, shooting, and attempted murder, the Palestine News and Info Agency, WAFA, reported.

PPS Lawyer, Tareq Barghouthi, managed to refute all Israeli claims against his client and accused the Israeli interrogators of using psychological and physical methods of torture.

The lawyer managed to prove his case after the court listened to defence witnesses, and to Israeli security and police interrogators who tried to justify their acts.

Barghouthi stated that in addition to extreme physical torture and abuse, his clients was deprived from sleeping, was not allowed access to prescribed medications he takes due to a nerve disorder and his hands and legs were tied to a chair that was chained to the ground for several days. Furthermore, he received continuous threats of a prolonged interrogation, and they placed him under administrative detention for an extended period without charges.

The interrogators further threatened to arrest and interrogate family members of PPS lawyer Barghouthi, and even brought his brother in for interrogation. His lawyer was not allowed to visit him for forty days.