Child, 12, Dies Of Wounds Suffered During Israeli Shelling On Gaza 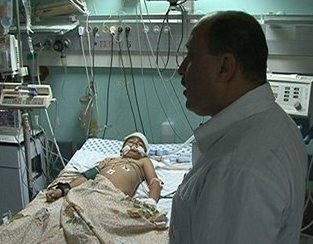 Palestinian medical sources in the Gaza Strip reported that a child identified as Ramadan Bahjat Az-Za’lan, 12, died of wounds he suffered when the army bombarded his family’s’ home on Friday, north of Gaza City. His father died instantly after the bombardment; 17 residents, including several members of his family, were injured.The child and several members of his family were injured in the Israeli bombardment and were moved to the Ash-Shifa Hospital in Gaza city.

He remained in a serious condition at the Intensive Care Unit until he died of his injuries, medical sources in Gaza reported.

Five members of his family are still hospitalized; they were all wounded when an Israeli missile hit their home as they slept.

Bahjat Az-Zalan, 42, the father of the child, was immediately killed in the Israeli bombardment; thousands participated in his funeral on Friday afternoon.

With the death of the child and his father, the number of Palestinians killed in the latest Israeli escalation (in 48 hours) arrived to five, while several others were wounded.