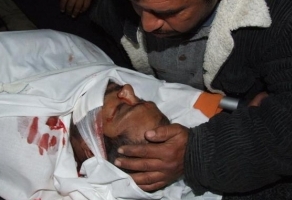 The Egyptian Ambassador to Palestine, Yasser Othman, held the Israeli government responsible for the latest escalation against the Gaza Strip that led to the death and injury of several Palestinians, including children.Talking to the Maan News Agency, Othman stated that Israel is behind the latest wave of violence, and demanded Tel Aviv to stop its assaults, so that Cairo can hold talks to regain clam in the region.

He added that Egypt is heavily involved in the efforts to restore calm, and that Israel needs to stop its military escalation in order for these efforts to succeed.

Othman further stated that, by assassinating Issam and Sobhi Al Batsh on
Thursday, Israel toppled Egyptian efforts to maintain truce, and went ahead to bombard Gaza on Friday at dawn leading to the death of one resident and the injury of 13 others; all members of the same family, including children.

In related news, member of the Executive Committee of the Palestinian Liberation Organization (PLO), Dr. Hanan Ashrawi, stated that the latest Israeli military escalation against the Gaza Strip “is an Israeli attempt to cause further destabilization in the region”.

She described the Israeli assaults as acts of collective punishment against the Palestinian civilians, adding that Israel is seeking retaliation from the resistance so it can conduct a larger military offensive in order to stop the efforts to rebuild the Gaza Strip after repeated devastating military assaults, and to stop the Palestinian political moves in the international arena.

“Israel wants to destabilize the region, it is seeking retaliation; this is a very dangerous policy”, Dr. Ashrawi stated, “Israel want to strike the truce, the Palestinian reconciliation efforts; Tel Aviv is seeking escalation”.

On his part, Ismail Haniyya, Prime Minister of the Hamas-led government in Gaza, stated that his government is holding talks with Arab and international countries to stop the Israeli escalation that led to the death of three Palestinians, and the injury of 20 others since yesterday.

He added that Israel will never be able to target the Palestinian steadfastness, and the ability of the resistance to defend its people.

“This escalation came after repeated threats made by Israel’s political and military
leaders against the Gaza Strip”, Haniyya said, “Now, they are randomly bombing Gaza, conducting assassinations and killings”.