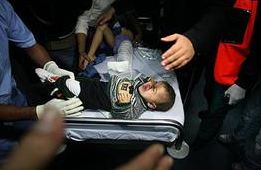 The Israeli Army and the Defense Ministry held the Hamas movement in Gaza responsible for the death of a Palestinian father, on Friday, and the injury of 17 residents, including seven children of the same family, when the army bombarded an area believed to be a training center of the Al Qassam Brigades, the armed wing of Hamas.A spokesperson of the Israeli army claimed that explosions took place after the army carried out an air strike in Gaza City, adding that side explosions took place following the strike and attributed the explosions to the claim that Hamas and other armed groups stored weapons and explosives near the targeted area”.

The spokesperson added that “he is sorry that innocent civilians were killed, and injured, in the Air Strikes”, and stressed that “Hamas is fully responsible for this outcome due to its terrorist activities”.

Adham Abu Salmiyya, spokesperson of the Higher Committee of the Medical and Emergency Services in Gaza, reported Friday that resident Bahjat Az-Za’lan, 42, from Gaza City, was killed while twelve residents, most of them members of his family- including his wife and a number of their children- were injured. Two of his wounded children are in serious condition. The injured include seven children, two women and two elderly.

Abu Salmiyya described the attack as a “Massacre targeting the civilians.” Also, medics provided treatment to five more residents who were injured by shrapnel.

Meanwhile, the Hamas-run Ministry of Interior in Gaza issued a statement on Friday holding Israel responsible for targeting a civilian car in central Gaza on Thursday afternoon leading to the death of Sobhi Ala’ Al Batsh, 21, and Isam Al Batsh, while several bystanders were injured, some seriously. The two are members of the Al Aqsa Brigades, the armed wing of Fateh movement.

The Ministry called on the International Community and human rights groups to intervene and stop the Israeli military escalation on Gaza.