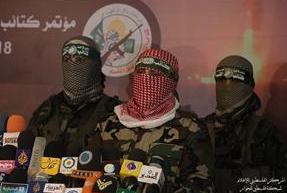 Abu Obaida, spokesperson of the al-Qassam Brigades, the armed wing of the Hamas movement, stated that the Palestinian resistance managed to liberate 20% of the detainees imprisoned by Israel, and will remain committed to securing the release of all detainees.His statements came Sunday after Israel released 550 detainees during the second and final phase of the prisoner-swap deal that secured the release of Israeli soldier, Gilad Shalit, in return for the release of more than 1,000 detainees.

The first phase was implemented on October 18 when the resistance sent Shalit to Egypt and Israel released 477 Palestinian detainees.

Abu Obaida further stated that the swap-deal came as an outcome of ongoing political, security and armed struggle, due to the relentless efforts of the armed groups, adding that the al-Qassam Brigades were in direct communication with Egypt to ensure that Israel fulfills all of its obligations under the Egyptian-mediated swap-deal.

He also stated that the deal states that Israel must release all female prisoners, yet, Israel did not release some of them under the claim that they live in the 1948 territories.

“This is unacceptable to us, we will continue the talks with Egypt to resolve this issue, and we hold Israel fully responsible for anything that could happen if it does not release them”.

Abu Obaida thanked the resistance, and saluted the fighters who were killed while resisting the occupation and during the attack that led to capturing Shalit in 2006.
The al-Qassam leader said that “armed resistance groups will always defend their people, will always act for the liberation of Palestine, and the release of all detainees”.