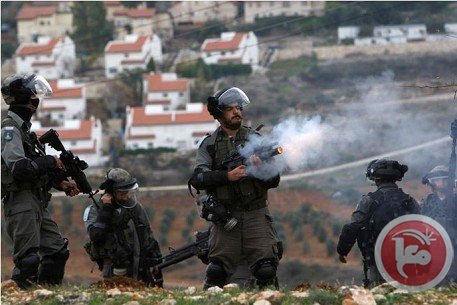 A number of Palestinian and international solidarity activists were wounded, including one shot in the neck, and several other protestors were detained in numerous anti-wall protests taking part in a number of West Bank villages on Friday afternoon.In their weekly protest, the villagers of Kufr Qaddum, near the West Bank city of Nablus, organized a march joined by hundreds of residents and international supporters. Israeli soldiers suppressed the protest by firing a number of tear gas canisters and concussion grenades at them.

Several were wounded as a result of this, and were treated by field medics. Protestors raised Palestinian and Fatah party flags to commemorate the forty seventh anniversary of the establishment of the Fatah party.

In the village of Al-Ma’asara, near Bethlehem, Israeli troops detained Irene Nasser, aged 35, from Nazareth, in addition to an international supporter who was at the protest.

In the meantime, in the village of Bil’in, near the central West Bank city of Ramallah, one resident was wounded and dozens suffered tear gas inhalation, after the gas was fired by the Israeli military to suppress the protest.

Hundreds of local, international and Israeli protestors joined the march and chanted slogans commemorating the third anniversary of the Israeli war on Gaza (2008-2009) during which around 1,500 people were killed in the 21-day assault against the besieged costal strip.

Mohammad al-Khatib, aged 19, was wounded when a rubber-coated steel bullet struck in his neck; he was transferred to the hospital for treatment.

Some protestors wore Santa Claus costumes, and sent Christmas Greetings to those celebrating Christmas in Palestine and the rest of the world.

At the town of Qalandia, near Ramallah, the Fatah party organized a march to commemorate its forty-seventh anniversary, where protestors chanted slogans and waved Palestinian flags. Israeli troops fired tear gas and rubber-coated steel bullets at the protestors, causing dozens to choke.

In Nabi Saleh, the site of a fatal Israeli shooting of a protester on December 9th, protestors gathered and marched to the site of the Wall construction, paying homage to the young man who was killed. Israeli forces fired tear gas and rubber-coated steel bullets at the protestors.

Later, an Israeli military unit invaded the village looking for protesters, however no arrests were reported.