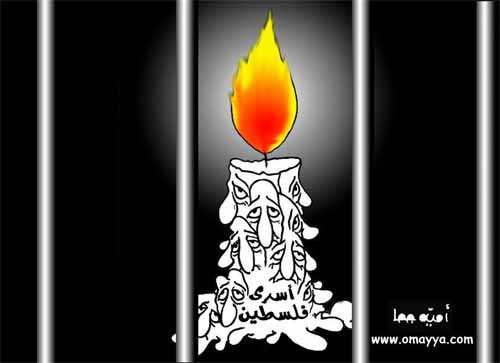 They said that Israel must be held responsible for its ongoing violations, ongoing attacks and illegal conditions it imposed on the detainees, especially since International Law and all related human rights resolutions guaranteed the rights of all political prisoners.

They added that they support the stance of the Palestinian Liberation Organization (PLO) in refusing to resume peace talks with Israel until it stops its violations and settlement activities, and that the Palestinian leadership must always act on ensuring the release of all Palestinian detainees without any preconditions.

In their letter, they also stated that “the battle of empty bowels is the most effective method the detainees can use to achieve their legitimate rights”, and that they are willing to sacrifice and risk their own lives by launching an open-ended hunger strike based on the Irish style in order to achieve the following rights;

1. Israel must treat us as prisoners of war, in accordance with the Fourth Geneva Conventions.

2. We support the position of the PLO in refusing to resume peace talks with Israel until it stops its violations and settlement activities, and we affirm the right of all detainees to be released, especially those who spent many years behind bars.

3. We refuse any attempt to delay talks on the detainees’ issue until the final stage of peace talks.

4. Our case is a top priority, and no final peace agreement should be reached without our release.

5. We demand a fair resolution to our cause, especially the old detainees, those who spent years behind bars, and we demand that the leadership should not resume peace talks unless our issue is resolved.

The minister further stated that during the most recent talks between the representatives of the detainees in the Negev, and the administration at the camp, the director of the prison threatened that he would instruct the soldiers to use excessive force to vacate the camp and send the detainees to different prisons, in order to weaken them, and scatter their leaders in different prisons.

He further stated that the detainees made a decision to resist the Israel plan, adding that Israel want to remove the entire prison population in order to replace them with Sudanese and African illegal migrants.

The situation at the Negev Camp is on edge, and fears of an imminent attack are increasing.

The detainees are demanding Israel to respect its own vows to reduce their suffering and stop the attacks and violations against them.

Qaraqe’ said that in 2011, Israeli soldiers carried out 200 attacks against the detainees, and that the majority of these attacks were carried out after midnight. Hundreds of detainees were injured, and illegal sanctions were imposed on them, including placing dozens in solidarity confinement, depriving them from their visitation rights, imposing fines on them and depriving them from accessing the prison canteen.

“2011 witnessed dangerous attacks against the detainees, their dignity and their living conditions, hundreds were deprived from access to education”, Qaraqe’ stated, “More detainees were forced into solitary confinement, deprived from visitations; Israel is acting above the law, challenging the International Community and the basic principles of human rights”.