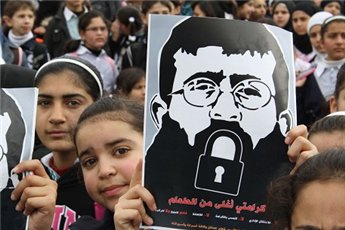 Sheikh Khader Adnan, who ended his hunger strike last week after 66 days after Israel agreed to release him this April, was under a night-long Gastrointestinal surgery at the Zeef Hospital in Safad due to blockage in his intestines.
Former political detainee, Rafah Hamdouna, called on the Palestinian Prisoners Society, human rights groups, and several medical and human rights group to follow-up on Adnan’s case, and to ensure that Israeli allows Palestinian medical teams to visit him.

Adnan faced a near-death condition during his hunger strike but he insisted on not halting his strike until Israel orders his release especially since he is held without any charges.

Although Adnan agreed to begin taking food again last Tuesday, his health is still at risk, due to the length of time he was without food. Medics have warned that his body may reject the food, and he could still die of organ failure.