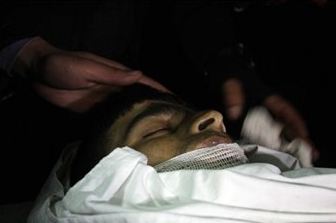 The Wall and Settlements Information Center at the Palestinian Authority’s Ministry of Wall and Settlements, issued a report revealing that Israeli soldiers and settlers carried out 145 attacks against the Palestinian residents, their lands and homes, killing one and wounding several others.Tal’at Ramia, 25, was killed on Friday February 24, during clashes with Israeli troops near the Qalanida terminal, north of occupied East Jerusalem; the residents were protesting attempts by extremist settlers to break into the Al-Aqsa mosque.

The Center reported that soldiers demolished 42 structures in the West Bank; 22 homes and structures were leveled in Khirbit Ar-Rahwa, 3 in Ath-Tha’la area, and one home in Surif.

Furthermore, Israeli settlers carried out dozens of attacks, uprooting and bulldozing 4931 Dunams (1218.47 Acres) of Palestinian farmlands; 1825 Dunams in Jaloud – Nablus, Nahhalin and Al-Jab’a in Bethlehem, Yousouf and Sarta in Salfit, in addition to Beit Ola and Al-Himma in Hebron and Tubas. 1383 Dunams were bulldozed and uprooted, and owners of 1723 Dunams were prevented from entering their lands after extremist settlers planted them and are attempting to take them over. 1169 trees were uprooted in Surif, Beit Ummar, Tormos Ayya, Aqraba and Michmas.

The report further pointed out the escalating attacks carried out by Israeli soldiers and settlers against Jerusalem and its holy sites, by the sharp increase of home demolitions, escalating settlement activities, sharply increasing attacks against holy sites, and the recent plan to plan to build a temple on 400 square/meters west of the Al-Boraq Wall, and other plans including the so-called “Visitors Center” in Wadi Hilweh in Silwan, the taking-over of a parking lot in the Armenian neighborhood in order to build a settlement outpost despite the fact that the land is owned by the Armenian Monetary.

This is all happening while excavations continue under the Al-Aqsa mosque and several areas in occupied East Jerusalem. The information center further stated that Israel recently approved a law exempting taxes on donations that support settlement projects.

As for the non-violent resistance against the Wall and Settlements in Palestine, Israeli soldiers continued their violent attacks against these protests, shot and wounded more than 22 protestors, including international and Israeli peace activists, in addition to 5 reporters.

Furthermore, Israeli settlers carried out dozens of attacks against the residents and their property leading to the injury of 9 Palestinians, including 6 women, and set ablaze six Palestinian cars. They also tried to torch a mosque near Ramallah, and broke into a mosque near Hebron.

The Israeli government also approved the construction of 500 units for Jewish settlers in Shilo settlement, between Ramallah and Nablus, granted construction permits for 200 units planned to be built in Shvut Rachel near Nablus, in addition to a plan aims at constructing a new settlement east of Ramallah to replace the Migron illegal outpost the was evacuated by the army.

Israel also announced a plan to build a religious Jewish school and a temple near Itamar settlement, near Nablus with an estimated cost of 9 Million NIS.

Two new outposts were installed on Palestinian lands in Tal Romeida and Al-Karmel in Hebron, while the Israeli government approved a plan to build a settlement that is handicap-friendly in the place of a former military camp that was evacuated by the army in the Bethlehem disctrict; it will be part of the Gush Etzion settlement block. Settlers also installed 18 mobile homes in a number of illegal outposts in the districts of Nablus and Ramallah.