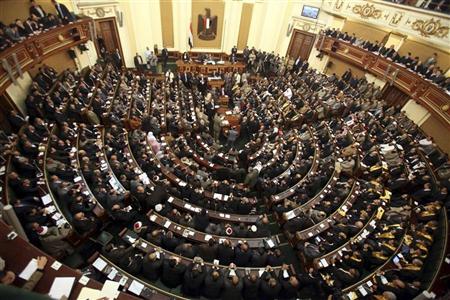 The Arab Affairs Committee at the Egyptian People’s Assembly of the Parliament recommended on Thursday conducting a legal study to determine and improve the operational methods of border terminals between Gaza and Egypt, and also recommended providing the coastal region with power and fuel supplies should Israel refrain from implementing its commitments regarding providing services to the area as part of its responsibility as an occupying force.The Assembly discussed the suffering of the Palestinian people, living under illegal Israeli siege and ongoing Israeli military attacks, in the Gaza Strip, and stated that Israel’s illegal measures are affecting the social, economic and health sectors in the Gaza Strip.

Assembly members recommended that Egypt provides Gaza with all of its electricity and fuel supplies, especially since hospitals and medical centers are unable to function due to power shortages, an issue that is endangering the lives of all patients, especially those with senior conditions, and those who need surgeries.

Gamal Hanafi, representative of the Arab Affairs committee at Egypt’s People Assembly, stated that “Egypt must continue its humanitarian role in providing services and supplies to the Gaza Strip via the Rafah Border Terminal, between Gaza and Egypt.

Also, acting Egyptian Foreign Minister, Baha’ Dsouqi, stated that the Gaza Strip is considered an important dimension of Egypt’s national security, and that Egypt considers Gaza as an occupied territory.

He added that Egypt is acting on the international level to ensure that the International Community performs its duties regarding ending the illegal Israeli siege on the coastal region, and ensuring the entry of all needed humanitarian and medical supplies.

The Egyptian parliamentarian also discussed the means to ensure the reconstruction of the coastal region devastated by repeated Israeli military assaults and bombardments, adding that the Educational System in the Gaza Strip is also heavily impacted by the Israeli violations due to the lack of construction materials needed to rebuild the schools that were bombarded and shelled by the Israeli army.