Shalabi Determined To Continue Her Hunger-Strike 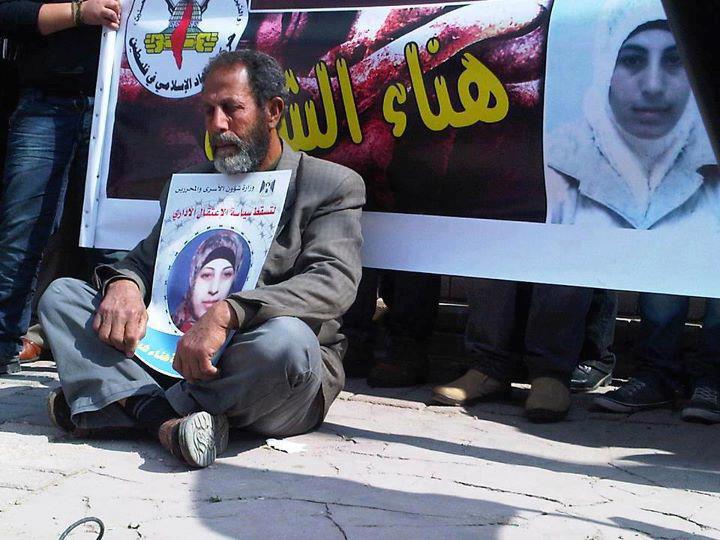 Detainee Hana’ Ash-Shalabi, who has been hunger-striking since more than two weeks now, stated that she is determined to continue her strike in order to highlight the plight of all detainees held under administrative detention, and the ongoing all Israeli violations against them.Fawwaz Ash-Shalloudy, a lawyer with the Palestinian Prisoners Society (PPS), visited Ash-Shalabi on Thursday.

She told him that she clearly felt the level of humiliation when she was transported to the Ofer Military Court; she was placed in a very cold room with opened windows, from all directions, and was mistreated during the transport.

Shalloudy managed to meet Ash-Shalabi at the Ha-Sharon prison; he said that the Prison Administration is conducting harsh measures against her in an attempt to force her break her strike.

Yet, the lawyer added that Ash-Shalabi is fully determined to continue her hunger-strike, and that she informed him that she will remain patient and steadfast until her message is delivered, and heard.

It is worth mentioning that her parents in Borqeen town, near the northern West Bank city of Jenin, are also hunger-striking in solidarity with their daughter, and voiced an appeal to local and international human rights groups to intervene and secure the release of their daughter.

Speaking to the IMEMC on Thursday, Yahia Ash-Shalabi, the father of Hana’, stated that his daughter lost a lot of weight, and that she can barely stand due to a decline of her health condition.

“Hana’ is losing a lot of weight; she can barely stand. I hold the Egyptian mediators of the prisoner-swap deal responsible for the well-being of my daughter,”

Ash-Shalabi, Hana’s father told the IMEMC from the protest tent outside his home in the village of Borqeen.

Ash-Shalabi was released last October after spending two years under Israeli administrative detention. Her release came as part of the Egyptian mediated prisoner-swap deal between the Palestinian resistance and Israel.

Israel uses Administrative Detention to hold Palestinians without charges; such rulings are frequently renewed mounting to months, and in many cases, to years behind bars.