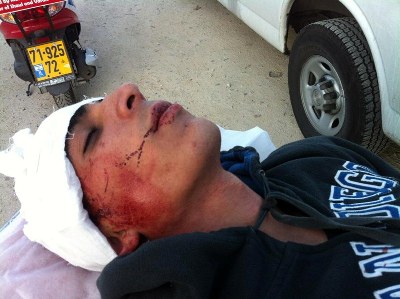 Israeli soldiers shot and injured, on Friday evening, several Palestinians in Al-Esawiyya, in occupied East Jerusalem, after invading the town leading to clashes with local youths; at least fifteen Palestinians were kidnapped by the army.Local sources reported that the army kidnapped at least fifteen Palestinians from the town, and that some of the kidnapped residents suffered concussions and bruises after being violently attacked by the soldiers and the undercover forces of the Israeli military.

The sources added that the number of kidnapped Palestinians could be in the dozens as the soldiers detained dozens of residents, and released some of them later on, but kept a large number in its prisons.

Earlier on Friday, Israeli soldiers opened fire at Palestinian protesters marking the Palestinian Land Day, in the Gaza Strip, killing one resident, while at least 37 residents, including one journalist, were wounded.

In the West Bank, soldiers shot and wounded approximately 100 civilians, including an American peace activist, while the residents were marking Land Day in several parts of the West Bank.

Hundreds of protesters marched towards Jerusalem demanding an end to the illegal Israeli occupation of Palestine, and were attacked by the soldiers at roadblocks and terminals leading to occupied Jerusalem.

Protests were also organized at the Lebanese border with the country, as well as areas that are close to the border with Jordan.