Committee of US Presbyterian Church votes to divest from Israel 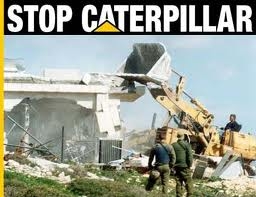 On Tuesday the Middle East Committee of the Presbyterian Church USA voted to divest from three companies involved with the Israeli military, citing human rights abuses carried out by Israel against the Palestinian people. The measure will now go to the full Assembly for a vote on Thursday.After voting down a similar resolution last year, the General Assembly of the Presbyterian Church tasked its Middle East Committee with researching alleged human rights abuses. The Committee’s report documents numerous cases of severe human rights abuses by the Israeli military against Palestinian civilians using equipment supplied by the three companies in question: Caterpillar, Hewlett-Packard, and Motorola.

Motorola provides two-way radios and other communications equipment to the Israeli military, Hewlett-Packard supplies the army with technological equipment, and Caterpillar supplies the military with armored bulldozers used to demolish Palestinian homes in violation of international law.

The church had previously voted in 2006 on a divestment resolution which urged “…financial investments of the Presbyterian Church (U.S.A.), as they pertain to Israel, Gaza, East Jerusalem, and the West Bank, be invested in only peaceful pursuits.” Since that time, the Presbyterian Church has been subjected to a campaign promoted by Zionist groups inside the US aimed at deflecting attention from Israel’s documented human rights abuses by charging that Arab regimes and Iran engage in abuses as well, so Israel should not be singled out for divestment.

In 2005, a coalition of hundreds of Palestinian organizations issued a call for boycott, divestment and sanctions of companies doing business with Israel, in an effort to pressure Israel economically to adhere to its obligations under international law. Since that time, companies, churches, universities and unions around the world have supported the campaign and divested tens of millions of dollars from the targeted companies. Most recently, US-based retirement fund TIAA-CREF divested from Caterpillar corporation after a lengthy campaign by boycott activists, costing the company $72 million in investments.

The United Methodist Church in the US also recently voted to support a selective boycott of companies working directly with the Israeli military, while shying away from a more comprehensive proposal that called for a full divestment of church funds from these companies.