Army To Arrest, Deport, Internationals Living In The West Bank 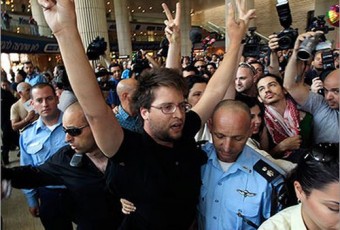 Israeli Ynet News reported that the Israeli Central Command Chief, Nitzan Alon, signed an order granting the Israeli Population and Immigration Authority “the right” to search for, and arrest, internationals illegally living in the occupied West Bank, in order to deport them”.Alon described the foreigners residing in the West Bank without a permit from Israel as “infiltrators’, and said that they all must be sent back to their countries.

Under this order, the army will be allowed to arrest foreigners in the Palestinian territories, move them into prisons in Israel until all deportation measures and documentations are concluded.

Alon said that this decision was made due to what he called the “large number of infiltrators currently residing in the West Bank”, the Ynet said.

Israel is in control of all border terminals in the West Bank, internationals living in the Palestinian territories face numerous hardships and obstacles as Israel refuses to renew their entry visas.

Israel also prevented dozens of international peace activists from entering the occupied territories, by placing an “Entry Denied” stamp on their passports, preventing most of them from entering the country for 10 years.

The Palestinian Authority in the West Bank does not control border terminals, and cannot issue entry visas.

Israeli restrictions against internationals living in the West Bank are also forcing the separation of hundreds of families where Palestinians are married to Arab or international spouses as Israel is refusing to grant them family reunification documents.