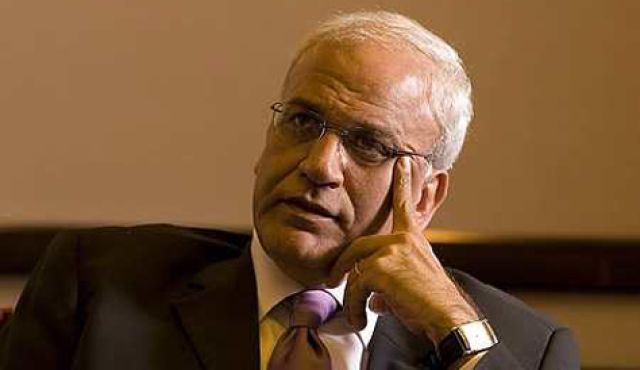 Saeb Erekat, Chief Palestinian Negotiator, dispatched a letter to the international community urging them to “examine their bilateral agreements with Israel to ensure that they are not unwittingly supporting Israel’s occupation,” WAFA news reported on Wednesday.He asked that foreign governments “extend bilateral recognition to the State of Palestine on the 1967 border” in order to “preserve the two-state solution that is fast becoming impracticable.”

He expressed the serious concerns of the Palestinian leadership regarding a series of recent Israeli statements. Most provocative, is the assertion by Israelis that they have jurisdiction over the Aqsa Mosque compound in Jerusalem which he decried as “illegal and dangerous.”

The recent findings of the Israeli government-appointed Levy Commission were also at issue. The commission recently attempted to legitimize Israeli settlements that have repeatedly been found to be violations of international law. Erekat commented that “this report clearly exposes Israel’s determination to further entrench the occupation, continue violating its obligations under international law and, in effect, make the current unacceptable status quo of occupation, aggression, and land grab an irreversible reality.”

Numerous UN Security Council resolutions, the Advisory Opinion of the International Court of Justice, and the Fourth Geneva Convention all condemn the Israeli settlements and occupation.

He called on the international community to assume their legal and moral responsibilities in support of peace in the region and the inalienable human rights of the Palestinian people by ending the continuous violations committed by Israel against Palestinians and their land.