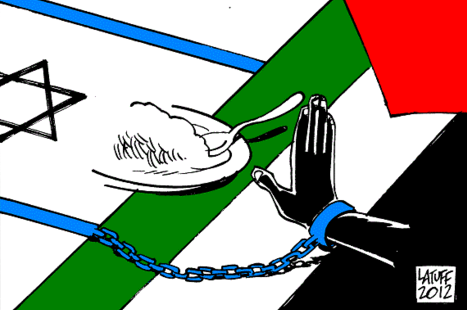 The Prisoner Support and Human Rights Association (Ad-Dameer) said that it is deeply concerned regarding the lives of Palestinian detainees who are conducting extended hunger strikes in Israeli prisons, especially due to sharp deterioration in their health conditions. Ad-Dameer lawyer, Fares Zayyad, visited on Monday December 3, detainees Ayman Sharawna and Samer Al-Esaawy, but was not allowed to visit detainee Odai Al-Keelani who started his strike 45 days ago.

Detainee Al-Esaawy, from Jerusalem, who was released under the Shalit Prisoner Swap Deal, and was rearrested by Israel. He started his hunger strike 126 days ago, and informed the lawyer that he will not end his strike “until he is free or until he receives martyrdom”.

He is in a critical condition and was hospitalized last week after suffering low heart rates, before he was moved back to the Ramla Prison Clinic that lacks basic equipment and supplies.

He then suffered another setback, and was moved to the Assaf Harofeh Medical Center, where he was admitted to the Intensive Care Unit after his heartbeat rates reached as low as 36/minute.

He initially rejected any medical treatment, but was informed that he will be forced to receive treatment; he then took certain medications and on Thursday, November 29, was moved back to the Ramla Prison Clinic.

Al-Eesawy repeatedly faints, and cannot stand or sit; Ad-Dameer said that a prison doctor recently left him on the ground after he fainted and fell.

Meanwhile, detainee Ayman Sharawna, 36, who was also released also under the Shalit deal, was rearrested on January 31, 2012l he started his hunger strike 157 days ago, and told the lawyer that an Israeli intelligence officer repeatedly meets with him in an attempt to convince him to end his strike without providing any written offers to release him.

The Ad-Dameer held Israel responsible for the lives of the hunger striking detainees, and called on the Palestinian leadership, and the Egyptian leadership, the sponsor of the Prisoner Swap Deal, to act fast to ensure the release of the detainees.

Among the detainees, there are 152 detainees who are from occupied East Jerusalem, 191 of the 1948 territories, and 445 from the Gaza Strip.