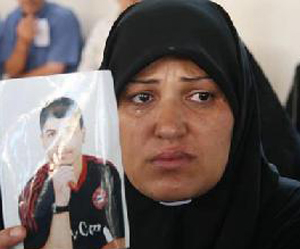 The Husam Society for Detainees and Ex-detainees reported that Israeli soldiers subjected wives and mothers of Palestinian detainees to illegal strip search before they visited their detained family members on Monday.The society stated that female soldiers of the Israeli army humiliated the visiting female relatives of Palestinian detainee conducting their first visit to their loves one since the latest war on Gaza had ended.

In sworn testimonies to the Society, the families said that mothers of wives of dozens of detainees were taken to special rooms and were demanded to remove all of their clothes, and when they refused, they were told that they will be sent home without visiting their detained family members.

In tears and agony, they submitted to the illegal search so that they can visit their detained loved ones, the Husam society said.

The families stated that they were humiliated and made fun of, adding that they have never seen such extent of cruelty before, despite the fact that this is not the first time they had to undergo such illegal searches.

They complained to the Red Cross representative who accompanied them, but he said that he has no authority to prevent the army from conducting these searches, an issue that pushed the families to criticize the Red Cross, and its unconvincing response to such a grave violation.

Husam said that the Israeli occupation deliberately humiliates the families as an act of revenge due to Israel’s defeat it its recent war on Gaza, and demanded the International Community to intervene and stop the Israeli violations.