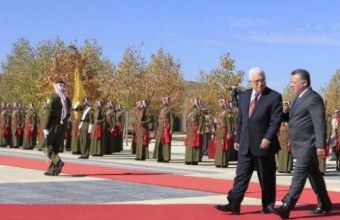 Jordanian Al-Ghad Newspaper reported that that King Abdullah of Jordan intends to visit the central West Bank city of Ramallah, on Thursday December 6, to hold an official meeting with Palestinian President, Mahmoud Abbas. Nimir Hammad, political adviser to Mahmoud Abbas, stated that this visit is the first of an Arab leader since Palestine managed to upgrade its status to a non-member state at the United Nations – General Assembly.

Hammad added that this visit sends a strong message to Tel Aviv regarding Jordan’s support for the internationally guaranteed rights of the Palestinian people to achieve liberation and independence.

The visit comes while Israel declared plans to build thousands of units for Jewish settlers in occupied East Jerusalem, and the West Bank, in direct violation of international law, and amidst international condemnation.

Hammad said that the Palestinian leadership went to the United Nations due to Israel’s lack of interest in peace, and in ending its illegal occupation and its illegal settlement activities.

He also stated that the Palestinians went to the UN to achieve international recognition of an independent state on the 1967 territory, with Jerusalem as its capital.

The official added that this recognition does not prevent the resumption of peace talks, adding that the Palestinians will be willing to resume talks based on the two-state solution; talks between two states as Palestine is now a state that is under occupation, and its borders are known.