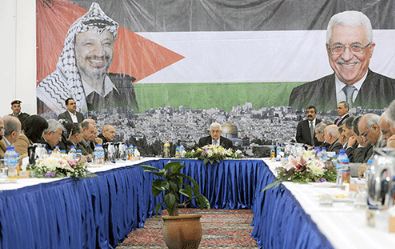 The Palestinian Authority in the West Bank, headed by president, Mahmoud Abbas, decided to head to the United Nations Security Council to ask it for a resolution ordering Israel to stop all of its settlement activities in the occupied West Bank, and in occupied East Jerusalem, especially the recently approved plan to build more than 3000 units for Jewish settlers. On Tuesday at night, the P.A. held a meeting headed by Abbas and decided that it will stand firm in opposing Israel’s new settlement construction plan, adding that the future of the two-state solution, and the entire peace process, is threatened by Israel’s illegal settlement activities and its ongoing violations.

The P.A. added that this latest project is the “most dangerous, and the most racist” Israeli plan that should not be allowed to be implemented.

The Palestinian leadership further stated that it will continue to act on the international level, and with all related international institutions in order to start a real and a serious political process that aims at ending the illegal Israeli occupation, and for the construction of strong national institutions to best serve the Palestinian people.

It also called on the Arab Follow-up Committee to accelerate the implementation of its plan to secure a financial safety net of at least $100 Million a month to overcome the Israeli sanctions and illegal policies of collective punishment.

The Palestinian leadership also affirmed the urgent necessity to implement the National Unity agreement in order to maintain a strong and a united internal front.

According to Maariv Israeli daily, Israeli Prime Minister, Benjamin Netanyahu, stated that Israel will be facing difficult situations after the Palestinians managed to obtain state recognition, and due to Israel new settlement plan to link Jerusalem with the illegal Maale Adumin settlement.

Netanyahu met with official army and government spokespersons asking them to “explain Israel’s stance to the world”, and to play a more effective role in international media channels.

He said that the Israeli campaign must focus on the Palestinian stance that rejects to recognize Israel as a Jewish state, claiming that the conflict “is not about land, but about accepting Israel”.

The Palestinian leadership recognized Israel as a state, and its right to exist, before the signing of the first Oslo Peace Agreement in 1993, Israel on the other hand never made any official statement recognizing the Palestinian right to an independent state, and never recognized any of the related United Nations and Security Council resolutions.