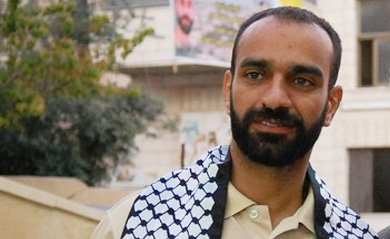 Israeli soldiers of the Nachshon Brigade attacked hunger-striking detainee, Samer Al-Eesawy, and his family when he tried to salute them as he was being taken into court. Al-Eesawy has been on hunger strike for 142 days demanding an end to his illegal detention, and is facing a sharply deteriorating health condition. Head of the Legal Unit at the Palestinian Prisoners Society (PPS), Jawad Boulos, stated that Al-Eesawy was brought to court after the prosecution claimed that he “violated a legal order” and “tried to manipulate witnesses”, adding that he was cuffed and his legs were shackled.

As he was being dragged to the court room, Al-Eesawy tried to greet his family when Israeli soldiers jumped all over him and attacked him in addition to attacking his family members.

Boulos added that Al-Eesawy is in a very difficult health condition, adding that “attacking a detainee who has been on ongoing hunger strike for 142 days, is a direct violation of all laws, and “an act of revenge against the detainee and all striking detainees”.

He added that he also asked the judge to move the detainee to hospital to conduct urgently needed checkups , especially since Al-Eesawy developed a very sharp chest pain, in addition to the fact that he is suffering from cuts on his neck.

The judge held a 30-minute court session before deciding to hold another session on December 27, 2012; he only instructed the soldiers that “Al-essay needs to be seen by a doctor”, and acknowledged that that his health condition is “difficult”.

Boulos said that the soldiers also beat Al-Eesawy when he tried to talk to reporters, and threw him onto the ground before dragging him from his arms and feet.
Head of the Palestinian Prisoners Society (PPS), Qaddoura Fares, stated that Israel’s courts are places where the detainees, their dignity and families, are attacked and humiliated instead of being places where legal proceedings are held.

Fares called on the international community and human rights groups to intervene and put an end to the ongoing violations and assaults carried out by Israel against the detainees, especially hunger striking detainees, including Al-Eesawy and Ayman Ash-Sharawna.