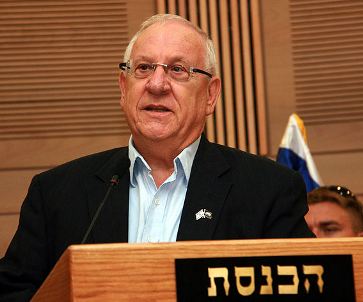 Head of the Israeli Knesset, Reuven Rivlin, of the Likud Party of Benjamin Netanyahu, stated that settlement construction in Jerusalem will continue, and claimed that Israel will never give-up control over occupied East Jerusalem under any peace agreement with the Palestinians.He claimed that Israel’s construction and control over the E1 area, between occupied East Jerusalem and the illegal Ma’ale Adumim settlement, is a “legitimate right” to construct on areas that “will always be part of unified Jerusalem, and the state of Israel”.

In a letter sent to his counterparts in different parts of the world “wishing them a happy new year” Rivlin said that “Europe seems to be consumed in the establishment of a Palestinian state more than it is thinking about the existence of a Jewish state”, and added that “the Europeans are mistaken when they think that Israel is secure”.

On Tuesday, sources in the office of Benjamin Netanyahu stated that the approved constructions in Ramat Shlomo illegal settlement in occupied Jerusalem “are only in the planning stage, and not an actual implementation of the project”.

On Monday, the so-called “Regional Committee for Construction and Planning in Jerusalem approved the construction of 1500 units for Jewish settlers in Ramat Shlomo.

Furthermore, Israel recently approved the construction of thousands of units for Jewish settlers in occupied East Jerusalem as part of the E1 illegal plan to link Ma’ale Adumim illegal block with occupied Jerusalem, by confiscating thousands of Dunams of Palestinian lands leading to the total isolation of East Jerusalem from the rest of the occupied West Bank, and blocking geographical contiguity of the Palestinian territory.

Settlements, regarding of what names and statuses Israel gives them, violate International Law and the Fourth Geneva Convention to which Israel is a signatory.

They are mainly built on privately-owned Palestinian lands, and on lands Israel dubs as “state lands” but the West Bank, including occupied Jerusalem, falls under Israeli occupation and are not legally part of Israel.

Israel’s settlements and its illegal Annexation Wall transformed the occupied territory into isolated cantons, are blocking the access of Palestinian villagers to their remaining farmlands and orchards, and completely surrounded and isolated several villages.