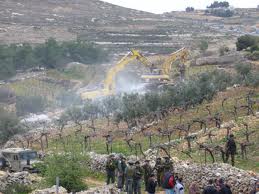 Monday February 11 2013; Palestinian medical sources reported that nearly 30 Palestinians have been treated for the effects of tear-gas inhalation during clashes that took place in Beit Awwa town, near the southern West Bank city of Hebron, after the army demolished a home, a shed and a well. Dozens of residents protested in an area south of Beit Awwa after the soldiers demolished the home, shed and well that belong to a resident identified as Rasem Mustafa Sweity.

The demolished home is a one-room building where Rasem and his seven family members lived.

The soldiers attacked the protesters and fired dozens of gas bombs and concussion grenades at them; at least 30 residents have been treated for the effects of tear gas inhalation.

A photojournalist identified as Amer Abdeen was also injured after a gas bomb, fired by the army, hit him in the left leg.

Earlier on Monday, Israeli soldiers invaded, an area west of Ithna Palestinian town near Hebron, and demolished a mobile home inhabited by Mohammad Badawi Tmeizy and his family.