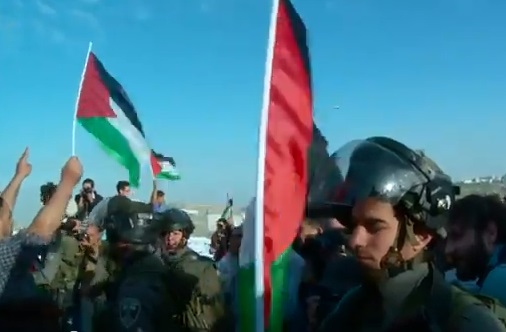 Saturday March 9, 2013, Israeli soldiers stationed at the Hizma Roadblock, north of occupied Jerusalem kidnapped a Palestinian nonviolent activist, head of the Bil’in Village Council, Basel Mansur, as he and dozens of residents and Israeli peace activists participated in a wedding procession, and were stopped and attacked at the roadblock.The locals and the international peace activists were part of a wedding procession, and as they tried to cross the Hizma roadblock, the army fired gas bombs, concussion grenades, and rubber-coated metal bullets at them. Dozens suffered the effects of teargas inhalation.

The Maan News Agency reported that the wedding was organized at the roadblock to challenge Israeli laws that try to prevent Palestinians in the West Bank from living with their spouses in Israel.

One of the wedding buses left from Jaffa, in the 1948 territories, and another bus left from Bil’in. The two buses were stopped by the military on the opposite sides of the roadblock.

Hazim, the groom is from Abu Dis town, east of occupied East Jerusalem, and his bride is from Nazareth.

The soldiers prevented the two buses from crossing both sides of the checkpoint, and fired gas bombs and concussion grenades at the guests who started singing and dancing on the West Bank side of the roadblock, the Maan News Agency reported.

The army then attacked the residents and kidnapped Basel before taking him to an unknown destination.

More than 200 persons participated in the wedding, including the founder of the Palestinian National Initiative, Dr. Mustafa Barghouthi, and Palestinian Author, Rima Kittana.

An Israeli military spokesperson claimed that the Palestinians hurled stones at the army, and that the soldiers “had to use riot dispersal means against them.”

The wedding procession was organized by a grassroots campaign known as “Love In The Time Of Apartheid”. Its work challenges Israeli laws and regulations that deny residency status for Palestinians from the West Bank who get married to Arab-Israeli citizens.

Berekdar said that such laws are meant to divide the Palestinians from each other, not only geographically, but also socially and culturally.

He urged the United Nations and Civil Society organizations to practice pressure on Israel to revoke its illegitimate laws that even interfere with the basic humanitarian rights of the Palestinians to choose their life partners.

In 2003, the Israeli Knesset passed the “Citizenship and Entry Law” prohibiting granting residency of citizenship rights to Palestinians who marry Palestinian citizens of Israel.
Israel claims its decision is motivated by security considerations.

The law was strongly denounced by various human rights groups, while Human Rights Watch said that this law violated the Convention on the Elimination of all forms of Racial Discrimination.’

After passing the regulation in 2003, the United Nations Committee of the Elimination of Racial Discrimination called on Israel to revoke it.

Bil’in village leads nonviolent and creative resistance against the Israeli Annexation Wall and settlements, and is subject to frequent invasions and attacks by the army.

The army frequently kidnaps and imprisoned leaders of the nonviolent resistance movement in the village in an attempt to force the villagers to stop their nonviolent activists against Israel’s illegal Wall and its illegal settlements.