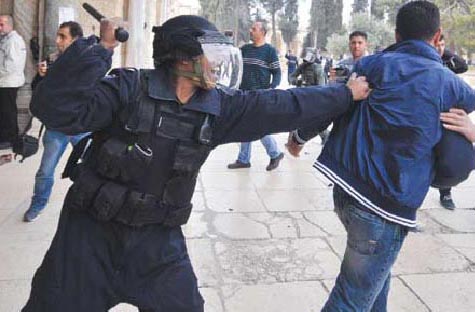 In the West Bank, on 12 March 2013, the Israeli forces killed a Palestinian civilian and wounded 5 others, including 2 children, one of whom is the victim’s brother, in the center al-Fawar refugee camp, south of Hebron. The victim as hit by a bullet to the jaw, and the Israeli force obstructed his evacuation to the hospital for 15 minutes.

On 07 March 2013, a Palestinian civilian died from a previous wound he had sustained on 22 February 2013, when the Israeli forces used force to disperse a peaceful demonstration organized in ‘Aaboud village, northwest of Ramallah, in solidarity with Palestinian prisoners in Israeli jails. The victim was hit by a rubber-coated metal bullet to the head.

According to investigations conducted by PCHR, on 22 February 2013, following the Friday Prayer, dozens of Palestinian civilians gathered in the center of the said village to organize a peaceful protest in solidarity with the Palestinian prisoners on hunger strike. The protestors went to the eastern entrance of the village near the adjacent settlement road. The Israeli forces stationed at the eastern entrance opened fire at them. As a result, 4 civilians, including Mohammed Asfour, were wounded. Asfour was wounded by a bullet to the head. He was transported to Rafidiya Hospital in Nablus. Following examination, it was found out that the bullet caused a fracture in the skull. On the same day, he underwent a surgery, but as he suffered from hemorrhage in the brain, the doctors conducted another surgery to him. Asfour had a coma and was transported to an Israeli hospital. However, he died on the above-mentioned date.

On 08 March 2013, 3 Palestinian civilians were wounded when the Israeli forces moved into al-Mazra’a al-Qibliya village, northwest of Ramallah, and fired at a number of young men and children who threw stones at them. On the same day, a Palestinian child was wounded in similar circumstances.

The Israeli forces established dozens of checkpoints in the West Bank. At least 2 Palestinian civilians were abducted at checkpoints.

In the same context, the Palestinians organized a number of peaceful protests in solidarity with the Palestinian prisoners, particularly those who are on hunger strike in the Israeli jails. The Israeli forces used excessive force against these protests. As a result, 17 Palestinian civilians, including 6 children and a freelance photojournalist, were wounded.

In the Gaza Strip, the Israeli forces continued 4 limited military incursions into Palestinian areas, during which they leveled areas of Palestinian land.

Israeli forces continued to open fire at the Palestinians near the border fence. As a result, 3 Palestinian civilians, including a mentally disordered person, were severely wounded.

On the same day, the Israeli forces positioned in watchtowers along the border fence, east of Jabalya in the north of the Gaza Strip, opened fire at a group of persons, who were 100-300 meters away from the border fence. As a result, a civilian was wounded.

On 08 March 2013, Israeli gunboats opened fire at a number of Palestinian fishing boats opposite to Rafah seashore in the southern Gaza Strip. The fishermen were forced to sail back to the beach and no casualties were reported.

On 10 March 2013, the Israeli forces positioned at the border between the Gaza Strip and Israel to the east of Deir al-Balah abducted a Palestinian child who attempted to cross the border into Israel.

On 11 March 2013, Israeli gunboats opened fire at a number of Palestinian fishing boats opposite to Beit Lahia seashore in the northern Gaza Strip. The fishermen were forced to sail back to the beach and no casualties were reported.

Notices were issued to evacuate and stop construction works in several facilities and water wells belonging to some Palestinians in Hebron.

295 olive trees were damaged in Ramallah and Nablus.

Due to the number and severity of Israeli human rights violations this week, the PCHR made several recommendations to the international community. Among these were a recommendation that the European Union activate Article 2 of the Euro-Israel Association Agreement, which provides that Israel must respect human rights as a precondition for economic cooperation between the EU states and Israel. PCHR further calls upon the EU states to prohibit import of goods produced in illegal Israeli settlements in the West Bank.

The PCHR calls on the international community to recognize the Gaza disengagement plan, which was implemented in September 2005, for what it is – not an end to occupation but a compounding of the occupation and the humanitarian crisis in the Gaza Strip.