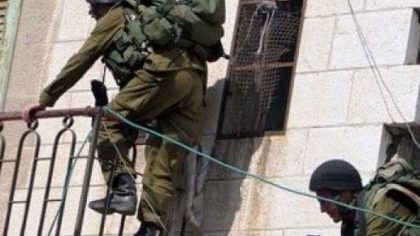 The Nablus office of the PPS, in the northern part of the occupied West Bank, said the soldiers stormed and searched dozens of homes and kidnapped three Palestinians.

Also in Nablus, the soldiers invaded ‘Aseera al-Qibleyya town, south of the city, before breaking into a Palestinian home and turning it into a military post.

The owner, Abdul-Basset Ahmad, said the soldiers occupied the second floor of his home, and kicked his son’s family out before turning the property into a military post, and used its rooftop as a military tower.

The invaded property is close to the Yitzhar illegal colony, built on Palestinian lands, south of Nablus.

Another Palestinian, identified as Ahmad Hussein Abu ar-Rob, was kidnapped from his home in Jenin, in the northern part of the West Bank.

In addition, the Ramallah office of the PPS, in central West Bank, said the soldiers kidnapped one Palestinian, identified as Yacoub Abdul-Jawad Romman, 32.

In occupied Jerusalem, the soldiers kidnapped Yassin Abu Laab, and a child, identified as Ahmad Sweilem, after he spent a few months under house arrest, before an Israeli court ordered him imprisoned.

In Abu Dis town, near Jerusalem, the soldiers kidnapped Eyad Za’atra, after invading and searching his home.