Army Clashes With Palestinians Near Nablus, As Colonists Continue To Bulldoze Lands 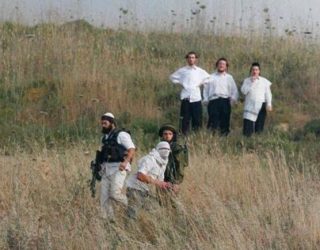 Israeli soldiers opened fire, Wednesday, on dozens of locals of Qusra, south of the northern West Bank city of Nablus, as Israeli bulldozers and colonists resumed the uprooting and bulldozing of Palestinian lands, east of the town.

The head of Qusra Local Council, Abdul-Atheem Wadi, said the illegal settlers resumed the bulldozing of Palestinian lands, east of the town, in an attempt to expand their colony.

He added that dozens of youngsters surrounded the bulldozers and attempted to stop them, before the soldiers invaded the area and fired dozens of gas bombs at them, in addition to assaulting several Palestinians.

The soldiers also closed the Qusra’s eastern road and prevented the Palestinians from entering or leaving the town.

On Tuesday, several Israeli bulldozers started uprooting the lands, close to the Megdalim colony, built on illegally confiscated private Palestinian lands, as Israel is planning to expand it.

Israel’s colonies in occupied Palestine, including in and around occupied East Jerusalem, are illegal under International Law and the Fourth Geneva Convention to which Israel is a signatory and a constant violator.