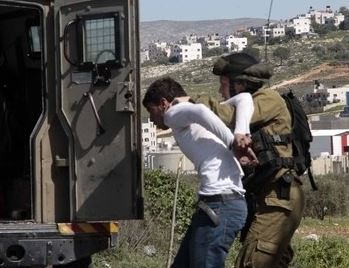 Both children were taken prisoner from their homes, while the soldiers also violently attacked and beat Al-‘Allamy.

Awad added that violent clashes took place in the town as local youths hurled stones at the invading soldiers. The army fired gas bombs and dozens of rubber-coated metal bullets.

He said that resident Ahmad Khalil Abu Hashem, 21, was shot by a rubber-coated bullet in his left shoulder, and another resident identified as Aktam Yousef Ikhlayyil, was shot in his abdomen and right arm. They were moved to the Hebron Government Hospital suffering moderate injuries.

Three more Palestinians suffered mild injuries after being hit by rubber-coated metal bullets, and were treated by local medics; their injuries did not require hospitalization.

Furthermore, Red Crescent medics provided treatment to a number of residents who suffered the effects of teargas inhalation.

Several families had to leave their homes at dawn due to the large number of gas bombs fired by the army.

Awad said that clashes took place in several main areas in the town, and that a number of youths hurled Molotov cocktails at a armored Israeli military vehicles; one armored troop carrier was burnt, no injuries have been reported among the soldiers.

Several soldiers also broke into a number of homes, and violently searched them causing property damage, and terrifying the residents, especially the children.

Earlier on Wednesday, dozens of soldiers invaded the northern West Bank city of Jenin, and kidnapped one resident. Another resident was also kidnapped in Teqoua’ village, near Bethlehem.

Israel soldiers invaded Palestinian communities in the occupied territories on a daily basis, violently break into and search local homes, and kidnap residents.