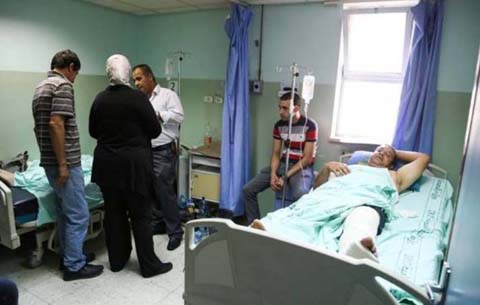 In its Weekly Report On Israeli Human Rights Violations in the Occupied Palestinian Territories for the week of 22 – 28 August 2013, the Palestinian Center for Human Rights (PCHR) found that Israeli forces killed 3 Palestinian civilians and wounded 18 others, including 5 children, in Qalandya refugee camp. In addition, a child was wounded by a live bullet to the head at the entrance of ‘Ayda refugee camp.Israeli forces have continued to use excessive force against peaceful protesters in the West Bank. 5 protesters were wounded during 2 protests in Bil’in village, west of Ramallah, and Kofur Qaddoum village, northeast of Qalqilia.

In the West Bank, on 26 August 2013, in an excessive use of lethal forces, Israeli forces killed 3 Palestinian civilians and wounded 18 others, including 5 children, in Qalandya refugee camp, north of occupied Jerusalem, in the centre of the West Bank. This crime was committed when Israeli forces moved into the camp to launch an arrest campaign, but dozens of Palestinians gathered and threw stones at them. Israeli forces immediately fired live ammunition, sound bombs and tear gas canisters. As a result, 3 civilians were killed and 18 others, including 5 children, were wounded. On the same day, a child was wounded by a rubber-coated metal bullet to the head while others suffered tear gas inhalation during clashes at the entrance of ‘Ayda refugee camp near Bethlehem.

Israeli forces conducted 49 incursions into Palestinian communities in the West Bank, during which at least 29 Palestinian civilians, including 4 children, were abducted.

During one of this week’s 49 invasions, into the Al-Arroub refugee camp, Ta’ayeed al-Bedawi, who was attacked by Israeli soldiers, said to a PCHR fieldworker that:
“I live in al-Titi neighbourhood in the centre of al-‘Arroub refugee camp and I am a government employee. At approximately 16:00 on Sunday, 25 August 2013, I received a phone call from my cousin, ‘Anan Ahmed al-Badawi (19), who told me that Israeli forces fired at their house tear gas canisters, which penetrated windows. Thus, they suffered severe gas inhalation. He then asked me to tell my brother, Mohammed (28), who is a paramedic at the Palestinian Red Crescent Association, to head quickly to them. I tried to search for my brother, but I could not find him. I then took a perfume with me and ran quickly to my uncle’s, ‘Abdel Qader Zakout, house, which is 400 meters away from our house, in order to save the house residents. When I arrived, a lot of gas clouds filled the place and 3 soldiers were near the house. I pushed the door and entered the house, where the gas looked like a huge cloud through which you cannot see. I went to the stairs, which lead to the second floor. I found Mohammed (14) and ‘Anan (19) sitting on the stairs and their condition was very difficult. I carried them and took them to the street, where I gave them first aid. Meanwhile, one of the soldiers held his neck and pushed him away from them saying that: You were throwing stones at us. Another soldier then grabbed my cousin, Mohammed, and wanted to arrest him on the same charge. I then told the soldier that ‘I came here to give them first aid, and none is throwing stones here’ as I was bare feet. The soldier then tried to tighten my hands to the back in order to arrest me after my attempt to rescue Mohammed from the soldier, who held him, till he managed to escape to the nearby houses. At that moment, one of the soldiers hit me with the gun’s but on my chest and shoulder several times in a row. I tried to escape from the soldier as a number of boys gathered and threw stones at the soldiers, who then kept distance from the place and started heavily firing tear gas canisters amidst houses. One of them heavily fired tear gas canisters at us to the extent that the soldiers fired at least 30 tear gas canisters in less than 10 minutes. At that moment, Mohammed (28), my Paramedic brother, arrived and offered us first aid. Before I went home, I went to check on my uncle’s house, which was subject to gas canisters. We found on the first floor a completely burnt carpet, pieces of broken window glass boards, which overlook the Main Street, and pieces of burnt plastic, which covered the ground on the second floor. We collected 6 tear gas canisters from the house. The next day, I went to the medical military services where it was found out that I sustained bruises, one of which left a 10-centimeter scar in the chest.”

In the Gaza Strip, on 22 and 23 August 2013, Israeli gunboats stationed off al-Waha resort, northwest of Beit Lahia, in the northern Gaza Strip, opened fire at Palestinian fishing boats that approached the border about 2 nautical miles off the shore. The fishermen were frightened and fled back to the shore fearing of being abducted or injured. However, neither casualties nor material damage were reported in both incidents.

On Sunday, 25 August 2013, the financial committee of the Israeli municipality approved the budget to prepare the infrastructure of 1,500 settlement units to expand ‘Ramat Shlomo’ settlement, north of occupied East Jerusalem.

On 26 August 2013, Israeli forces accompanied by bulldozers and officers from the municipality moved into Khellet al-Ein area in al-Tour village, east of occupied Jerusalem. They surrounded a house belonging to the family of Zakariya al-Daya (30) and demolished the house. The 140-square-meter house shelters 2 families comprising of 10 members. Israeli bulldozers then demolished another house belonging to the family of Maher Abu Sbaitan.

On Tuesday morning, 27 August 2013, some settlers punctured tyres of 10 vehicles belonging to Palestinians in Beit Safafa village, south of the city. According to Israeli sources, settlers wrote ‘Paying the price’ in Hebrew on the walls of that area.

Israel has continued its settlement activities in the oPt, a direct violation of international humanitarian law, and Israeli settlers have continued to attack Palestinian civilians and property.

On 25 August 2013, Uri Ariel, the Israeli Minister of Housing and a member of the Knesset for the ‘Jewish Home’ laid the foundation stone for ‘Leshem’ settlement, west of Salfit, north of the West Bank. The Israeli Ministry of Housing claimed this settlement is an expansion of ‘Ali Zahav’ settlement that was established in 1982.

On the same day, a group of settlers damaged and cut 25 olive trees in Abu Hanoun area 600 meters away from ‘Bracha’ settlement, southeast of Nablus. This is the second time this year these trees are attacked and cut.

On 27 August 2013, Israeli forces moved into Kherbet Um al-Khair, east of Yatta, and deployed between the tents. They prevented civilians from working in an under-construction house under the pretext it is built on a seized land, where nothing can be built without a prior permit from the Israeli civil administration as this land belongs to ‘Carmiel’ settlement that is established on lands of al-Hathaleen family in Kherbet Um al-Khair.

On the same day, Israeli forces accompanied by a civil administration officer moved into Deir Ma’lla area, east of al-Daheriya village, south of Hebron. The civil administration officer put 4 notices to halt construction works in front of 4 occupied houses and photographed them before he left. The notices gave the houses’ owners a period of time until 30 September 2013 to present their evidence documents and to adjust their legal status.

5 civilians were wounded in peaceful protests against settlement activities in the West Bank. Moreover, dozens of civilians suffered tear gas inhalation and others sustained bruises.

During the reporting period, Israeli forces continued the systematic use of excessive force against peaceful protests organised by Palestinian, Israeli and international activists against the construction of the annexation wall and settlement activities in the West Bank. As a result, 5 Palestinian civilians were wounded, dozens suffered tear gas inhalation and others sustained bruises. 3 civilians were wounded in Bil’in weekly protest, west of Ramallah, and 2 others were wounded in Kofur Qaddoum weekly protest, northeast of Qalqilia.

Due to the number and severity of Israeli human rights violations this week, the PCHR made several recommendations to the international community. Among these were a recommendation that the international community act in order to stop all Israeli settlement expansion activities in the West Bank through imposing sanctions on Israeli settlements and criminalizing trading with them;

In addition, the PCHR calls upon the UN General Assembly to transfer the Goldstone Report to the UN Security Council in order to refer it to the International Criminal Court in accordance with Article 13(b) of the Rome Statute.