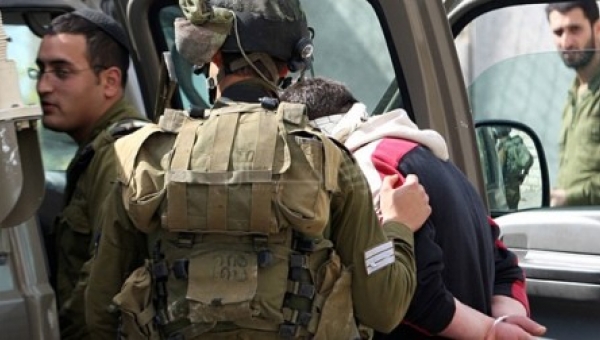 Sunday morning [September 15, 2013] Israeli soldiers kidnapped three children from Ya’bod town, south of the northern West Bank city of Jenin, and installed a roadblock at the eastern entrance of the village, searched cars and interrogated several residents.Local sources have reported that the soldiers invaded the western neighborhood of Ya’bod, broke into and searched several homes and kidnapped the three children. The soldiers also invaded Zibda nearby village.

Furthermore, soldiers installed a roadblock near the eastern entrance of Ya’bod, close to the Mabo Dotan illegal settlement, stopped dozens of Palestinian cars, and inspected the ID cards of the residents while interrogating them.

On Saturday, soldiers based on the Container roadblock, north east of the West Bank city of Bethlehem, kidnapped a young Palestinian man from Beit Fajjar town, near Bethlehem.

The kidnapped man has been identified as Fadi Mahmoud Taqatqa, 24; he was kidnapped after the army stopped a Palestinian car at the roadblock.

Last week, Israeli soldiers carried out at least 31 military invasion into Palestinian communities in the West Bank and the Gaza Strip, shot and wounded at least 40 Palestinians and kidnapped dozens, including 17 children.