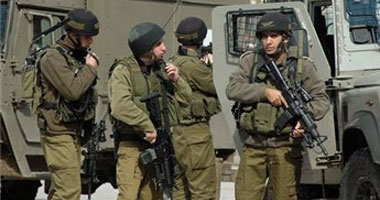 [Sunday at dawn September 15, 2013] Palestinian medical sources have reported that two Palestinian day laborers have been injured by Israeli army fire in the Ramadeen area, close to the Green Line, near the southern West Bank city of Hebron. The sources said that the soldiers chased dozens of workers trying to cross into Israel to search for work, kidnapped two workers, and wounded two others.
The two wounded workers suffered various burns as the army fired firebombs at them; one of the workers suffered fist degree burns.

Palestinian medics said that Nash’at Nimer Bashir, 23, suffered various burns in his abdomen and arms, while Khaled Nimir Suleiman, 21, suffered burns in his back.

Eyewitnesses said that the soldiers fired firebombs at a car transporting the workers causing it to catch fire.
The wounded have been moved to the Hebron Governmental Hospital, in Hebron, and received the needed medical treatment.

The two were moved to the Etzion military base; they were kidnapped after the army invaded Beit Ummar on Saturday night after midnight.

Their families were not informed of their arrest, causing them to panic after being unable to locate them; the families were only informed on Sunday morning when the Israeli District Coordination Office told them that their sons would be sent to court soon for what was described as “security violations”.