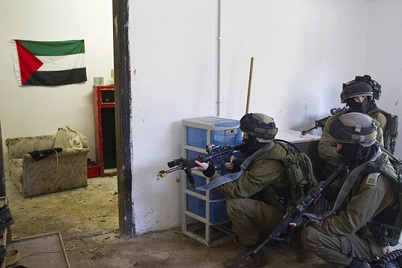 Wednesday at dawn [September 18 2013], dozens of Israeli soldiers invaded Yatta town, south of the southern West Bank city of Hebron, broke into and searched several homes, and installed roadblocks in various areas in the Hebron district. One Palestinian was kidnapped in Nablus.Eyewitnesses said that the soldiers violently searched various homes after breaking into them, and that the searched homes belong to members of the Abu Eqbeita family.

Furthermore, the army installed various roadblocks at the entrances of the towns of Halhoul and Sa’ir, the northern entrance of Hebron city, and the Al-Fawwar junction.

Local sources said that the soldiers inspected the ID cards of dozens of residents, interrogated them, and searched their vehicles.

In related news, dozens of soldiers invaded various neighborhoods in the northern West Bank city of Nablus, broke into and searched several homes before kidnapping one resident.

Local sources said that the army kidnapped Mohammad Nayef Daoud, 29, a resident of Ras Al-Ein neighborhood in the city, and took him to an unknown destination.

On Tuesday, a Palestinian youth was shot and killed by Israeli soldiers invading his home in the Jenin refugee camp, in the northern West Bank city of Jenin, while dozens of residents have been injured during ensuing clashes, and one was kidnapped.

Also on Tuesday, soldiers kidnapped at least nine Palestinians in different parts of the West Bank.