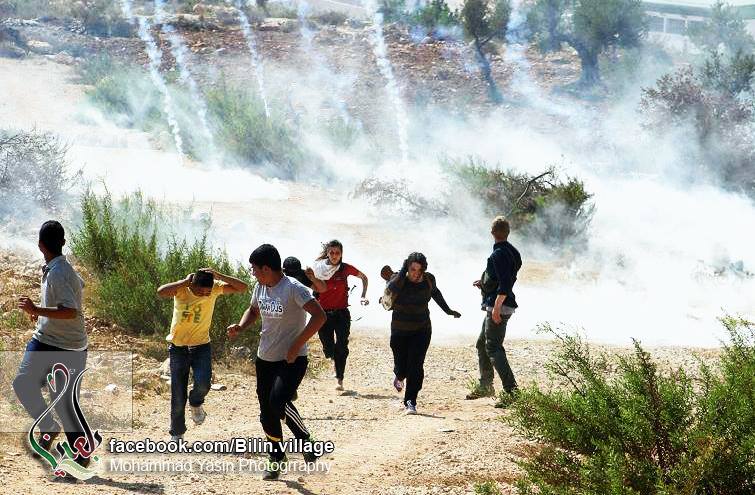 Medical sources in Bil’in village, near the central West Bank city of Ramallah, have reported that a cameraman was injured, and dozens of protesters suffered the effects of teargas inhalation, after Israeli soldiers attacked the weekly nonviolent protest against the Annexation Wall and settlements.Rateb Abu Rahma, coordinator of the Popular Committee Against the Wall and Settlements in Bil’in, stated that the soldiers fired dozens of gas bombs, concussion grenades, and rubber-coated metal bullets at the protesters as they approached Palestinian lands close to the Wall.

Abu Rahma added that cameraman Hamza Bornat, 21, was shot by a rubber-coated metal bullet in his arm, while dozens of locals, Israeli and international peace activists suffered the effects of teargas inhalation, the Radio Bethlehem 2000 has reported.

The protesters raised Palestinian flags and banners, and chanted for national unity, the release of all detainees, and the liberation of Palestine.

Also on Friday, soldiers attacked the weekly protests in the nearby villages of Ni’lin and Nabi Saleh.

Soldiers used teargas and chemical water that generate bad smell to attack residents and their supporters before leaving the village of Al Nabi Saleh.

Elsewhere at al Ma’sara village, near the West Bank city of Bethlehem, soldiers stopped the weekly anti wall protest at the entrance of the village.

Soldiers forced people back into the village using rifle butts and batons to bush people back, no injuries were reported.