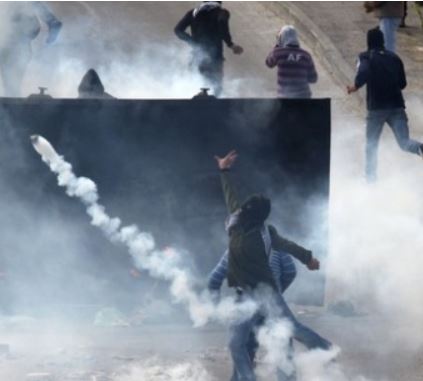 Friday evening [September 27, 2013] Palestinian medical sources have reported that three residents have been injured by rubber-coated metal bullets, fired by Israeli soldiers invading Azzoun town, east of the northern West Bank city of Qalqilia.One of the wounded has been identified as Ahmad Yousef Salama, 20, eyewitnesses said. He was shot in the by a rubber-coated metal bullet.

Soldiers held the wounded young man for several hours before finally allowing a Palestinian ambulance to take him to hospital.

They added that the clashes started when a number of Israeli military jeeps invaded the town, and harassed youths who then hurled stones and empty bottles at them.

Two more residents have been injured by live rounds before the soldiers closed the main gate of the village, preventing the residents from entering or leaving it.

The village is completely rounded by the illegal Israeli wall, and illegal Israeli settlements, while soldiers repeatedly close the its northern entrance preventing the residents from entering or leaving it.

There are more than seven Israeli settlements built on Palestinian lands around Azzoun, an issue that causes frequent tension and clashes between the residents, the soldiers and settlers.