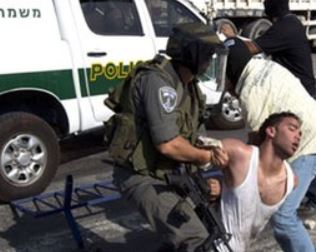 The Israeli army declared Sunday that an Israeli military court is looking into an indictment filed against two Israeli soldiers who beat a cuffed and blindfolded Palestinian.The Palestinian, from Gaza, was detained after the soldiers claimed he entered Israel without a permit, the Wattan TV has reported.

The two soldiers made no comment on the attack, while Israeli daily, Haaretz, has reported that a lawyer representing one of the soldiers said that his client denies the allegation.

Israeli media sources said that charges were filed against the two soldiers last Monday, and that the indictment indicates that they detained the Palestinian in an isolated room, and violently assaulted him while bound and blindfolded.

A third soldier, who concluded his military service, will also be facing charges along with a fourth soldier who stood guard outside the room while his colleagues assaulted the young Palestinian man.