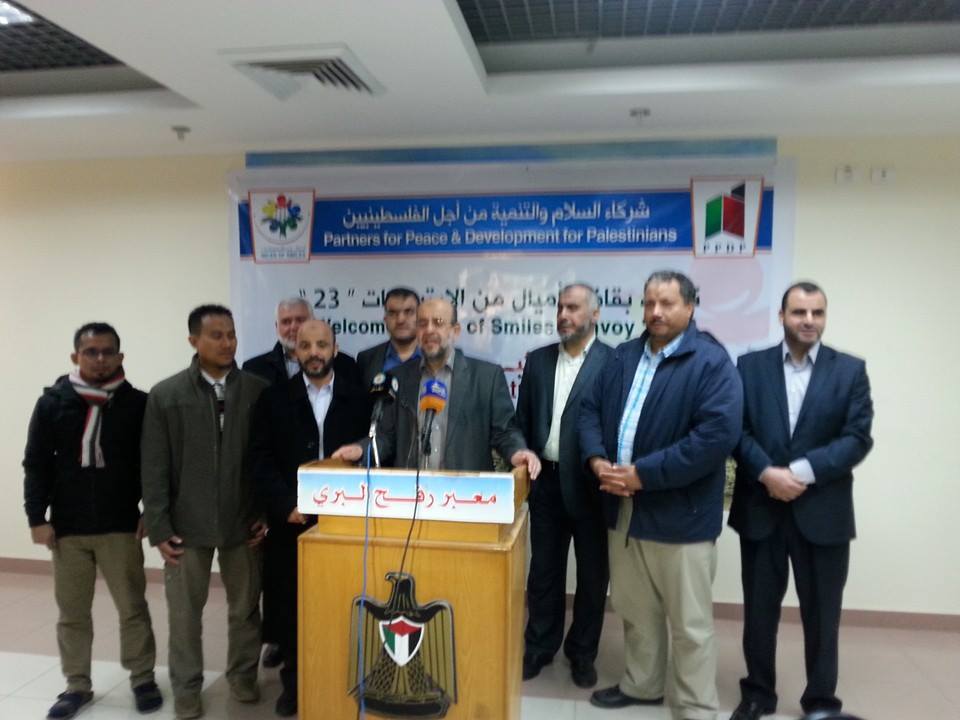 The “Miles Of Smile” solidarity aid convoy made it into the coastal region, on Thursday [November 21, 2013], after crossing through the Rafah Border Terminal between Gaza and Egypt, carrying supplies and various Arab and other international champions.Media sources in Gaza say that the activists are from many different countries, including Algeria, Libya, Jordan, Britain, Sweden and Malaysia. The aid convoy is the first since Egypt’s President Mohammad Morsi was removed from power.

The Egyptian army, along with numerous Israeli air strikes, has demolished siege-busting tunnels along the border.

Partners for Peace & Development for Palestinians (PPDP) issued a press release stating that the convoy is part of a chain of the “Miles of Smiles” convoys which made it into Gaza, and continue to make trips to the coastal region in support of the Palestinian people and breaking the illegitimate Israeli siege.

It added that Miles Of Smiles conducted several visits to Egypt, holding talks with Egyptian officials regarding methods of supporting Gaza, and to find alternatives to the tunnels which impacted Egypt’s economy and violated its sovereignty.

The group also said that convoy members were warmly welcomed in Egypt. They have facilitated the transfer of medical supplies, canned meats and foods, and have received a permit from Egypt to transfer sanitation vehicles, ambulances and handicap-accessible vans.

On its own part, Miles Of Smiles urged all parties to continue their support of these humanitarian initiatives and convoys, in order to help the besieged people in the impoverished Gaza Strip, and to refrain from using the current events in Egypt as an excuse for not supporting these convoys and the Palestinians.

It stated that Egypt intends to conduct various new positive measures to ease the entrance of humanitarian convoys into Gaza, starting next month.