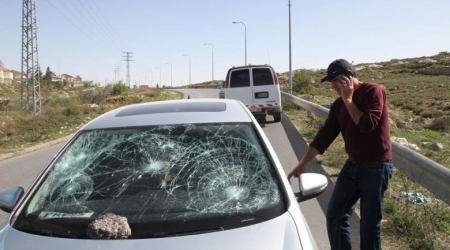 Israeli settlers in the West Bank stoned the car of a Palestinian photographer working for AFP, slightly injuring him, as he was on his way to cover a story, on Friday.
Photo: AFP photojournalist Abbas Momani stands next to his damaged car on the road leading to the al-Jalazun Palestinian refugee camp, near the West Bank Jewish settlement of Beit El, near Ramallah on March 7, 2014 after Israeli settlers threw stones at the vehicle.

(AFP/Al Ray) The photographer said that several of around 100 settlers, who were gathered at the side of the road, threw stones at his car, cracking the windscreen and lightly injuring him in the face and hands.

Israeli soldiers on the scene did not intervene, he added.

In photographs of the incident, four settlers are seen running, three of them with pistols. Another shows the settlers stoning the car, while the soldiers watched.

After the attack, soldiers moved the settlers on.