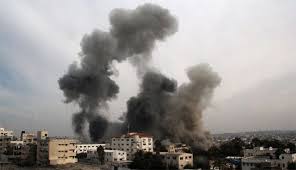 [Tuesday at noon, March 11, 2014] Palestinian medical sources said that three Palestinian resistance fighters have been killed by an Israeli shell, east of the Rafah district, in the southern part of the Gaza Strip. Six Palestinians killed by Israeli fire, since Monday.Ashraf al-Qodra, spokesperson of the Ministry of Health in Gaza, said the slain fighters have been identified as Ismael Abu Jouda, 23, Shaher Abu Shanab, 24, and Abdul-Shafy Moammar, 33.

Al-Qodra added that the three fighters died of serious injuries shortly after being transferred to the Gaza European Hospital.

The three Palestinians are members of the al-Quds Brigades, the armed wing of the Islamic Jihad.

The Brigades said that the fighters clashed with Israeli soldiers invading an area east of Rafah, and fired shells at them. It vowed retaliation to the assassination.

The Israeli army claimed the soldiers killed the three fighters “after they fired mortar shells at Israeli vehicles operating the area.”

Later on, the army invaded the al-Fakhary and Sofa areas, east of Rafah, to search for an Israeli drone that crashed in the area. Military helicopters and drones also hovered overhead.

Israeli sources claimed Hamas fighters managed to locate the drone, after it crashed 500 meters into Gaza.

The army said that it is investigating the crash of the “Skylark” drone, but did not reveal whether the drone is now in the hands of Hamas fighters.

Israel said the drone has sophisticated systems which prevent the transfer of information to unauthorized access.

Earlier on Tuesday, Israeli soldiers shot and killed a young Palestinian man from Atteel village, northwest of Tulkarem in the northern part of the occupied West Bank.

Medical sources said that Fida’ Mohyeeddeen Majadla, 23, was killed after Israeli soldiers opened fire on his car at the al-Kafriyyat roadblock, south of Tulkarem.

The slain Palestinian has been identified as Raed Ala’ Ed-Deen Z’eitar, 38, from the northern West Bank city of Nablus. He is also a Jordanian citizen.