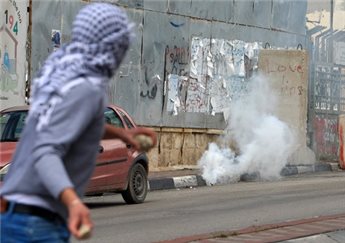 A number of young Palestinian men were injured by rubber bullets and excessive tear gas inhalation, during clashes with Israeli troops near Bethlehem, on Tuesday. Youth in the area had organized a rally near Azza refugee camp to protest the Israeli army’s recent killings of Palestinians, according to locals.

Witnesses said that the clashes broke out between the protesters and Israeli forces, in which Palestinians threw rocks and empty bottles, while Israeli forces fired rubber-coated steel bullets and tear gas canisters at the youths, Ma’an reports.

A few Palestinians were taken to the hospital for treatment, locals said, without specifying how many.

The clashes came after an Israeli airstrike killed three Palestinian militants in the Gaza Strip, and just hours after Palestinian security sources said that Israeli soldiers fired at a man in his car, and killed him, in the West Bank city of Tulkarem.

The Israeli army also killed two Palestinians in the West Bank on Monday.

Earlier, Israeli forces shot and killed a Palestinian-Jordanian judge at the Allenby Bridge crossing with Jordan.